Goal Against Cologne a Reward For my Comeback, says Arjen Robben

Arjen Robben was on the sidelines for almost two months due to a thigh injury but he felt he settled into the outfit quite easily. 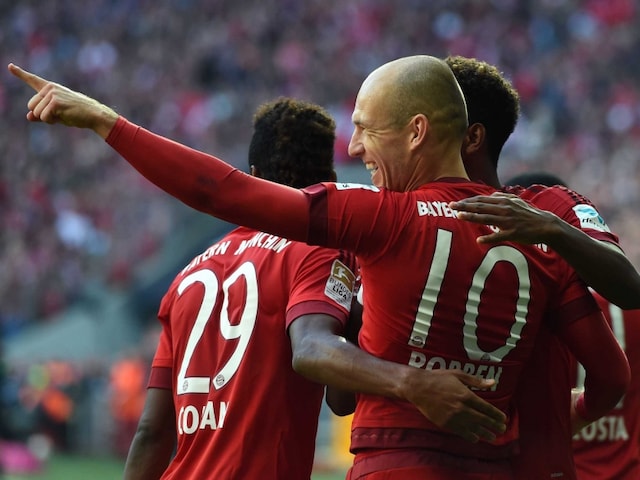 Bayern Munich's Arjen Robben (right) celebrates with teammates after scoring during their match against Cologne.© AFP

Bayern beat Cologne 4-0 and it was Robben who got onto the scoresheet first with a 35th minute strike on Saturday. The win thus not only gave the German football heavyweights their 10th league victory on the trot but also their 1,000th win in the premier German club competition.

The Dutch attacker had to sit out for around two months owing to a thigh injury but he felt he settled into the outfit quite easily.

"You always have to wait and see. I was very happy to be back on the pitch," Robben was quoted as saying by Goal.com.

"I think I was surprisingly good right from the start, but I have been training well and I felt good. To score the first goal was a nice reward for the hard work I've put in. When you win 4-0, the day is even better."

The 31-year-old also said that as a player it is the hardest thing to watch his team from the stands and not take part.

"Only being able to watch is the hardest thing for any footballer," the former PSV Eindhoven, Chelsea and Real Madrid winger said.

"You have to try and put all your positive energy into your recovery. I put everything in and worked very hard. Credit to everyone who supported me. I did it. I'm back."