Leverkusen striker Stefan Kiessling looked to have headed wide in the 70th minute and even thrust his arms into the air in frustration at his miss. But the ball then crept through a small hole in the side netting of the Hoffenheim goal. 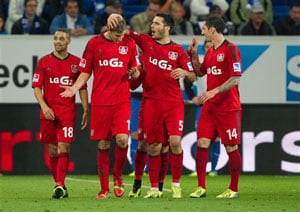 Bayer Leverkusen snatched top spot in the Bundesliga on Friday but only after a "ghost goal" allowed them to beat Hoffenheim 2-1.

Leverkusen striker Stefan Kiessling looked to have headed wide in the 70th minute and even thrust his arms into the air in frustration at his miss.

But the ball then crept through a small hole in the side netting of the Hoffenheim goal.

The referee awarded the goal despite the angry protests of Hoffenheim, who were already trailing 1-0 at the time to Sidney Sam's 26th minute opener. Gonzalo Castro had created the goal for Sam, who now has seven for the season.

Kiessling is not the first player to score a goal that never was in Germany.

On April 23, 1994, Bayern Munich defender Thomas Helmer also benefitted despite the ball not going into the goal in a 2-1 win over Nuremberg.

After Nuremburg lodged a complaint, the German federation ordered the match to be replayed -- and Bayern won 5-0.

Hoffenheim coach Markus Gisdol believes the 1994 incident has set a precedent for a replay of Friday's game.

"I think we are going to have to re-examine the TV pictures," said Gisdol.

"You cannot replay a match just for Bayern and not for Hoffenheim."

Kiessling admitted he had been left stunned by the incident.

"Everyone started rushing towards me. What could I do?" he told Sky.

"Honestly, I couldn't really judge what I saw but when Hoffenheim pointed to the hole in the net, I had an inkling."

"I had a little doubt, but the reaction of the players was clear," said the referee.

"I checked with Kiessling. But no-one, not even him said that it wasn't a goal. The ball was in the net and for everyone on the pitch it was a legitimate goal."

Leverkusen, on 22 points, now have a two-point lead over Bayern Munich, who can reclaim top spot with a win over Mainz on Saturday.

It was Leverkusen's seventh Bundesliga win of the season and gave the team coached by Sami Hyppia a timely boost ahead of their Champions League clash with Shakhtar Donetsk on Wednesday.

Comments
Topics mentioned in this article
Football Shinji Okazaki Bayern Munchen Borussia Dortmund Bayer Leverkusen
Get the latest updates on IPL 2020, check out the IPL Schedule for 2020 and Indian Premier League (IPL) Cricket live score . Like us on Facebook or follow us on Twitter for more sports updates. You can also download the NDTV Cricket app for Android or iOS.