The 24-year-old Real Madrid star, suffering with a thigh injury, was included by Wales manager Chris Coleman in the hope he might be available. 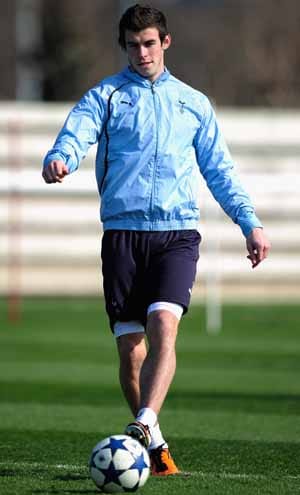 Gareth Bale, the world's most expensive player, was in and out of Wales' squad for the World Cup qualifiers against Macedonia and Belgium within a matter of hours Thursday.

The 24-year-old Real Madrid star, suffering with a thigh injury, was included by Wales manager Chris Coleman in the hope he might be available.

But Coleman subsequently said Bale would not play in either match and the forward later withdrew from the squad.

And he suggested Bale had been mishandled by Real since he arrived from Tottenham Hotspur last month in a deal widely reported to be the world's most expensive transfer at around £86 million (100 million euros, $132.5 million).

"I would never criticise another manager -- Carlo Ancelotti is a brilliant manager -- but La Liga football is a different tempo to the Premier League," Coleman said.

"The Premier League is the fastest so maybe Carlo is thinking Gareth can handle it, he's a super athlete.

"But in our last camp he was nowhere near fit. He had a reaction on the morning of the Macedonia game, that is why we only used him for 35 minutes against Serbia last month."

Coleman added: "We have spoken to the doctor and we will be without him, but we said all along it is very tough for him to have had no pre-season and be thrown in at the deep end."

The manager, explaining why an injured player who wasn't going to play in either game had been included in his squad, added: "He is named until we're told otherwise

"But after naming the squad I was told he had a problem. It looks like he will possibly be out for two weeks."

It was the second time in two weeks Bale has been sidelined by a thigh problem as he also missed the league matches against Getafe and Elche.

Meanwhile Wales captain Ashley Williams is a fitness doubt due the ankle ligament injury which has kept him out of Swansea's recent matches.

Veteran Cardiff striker Craig Bellamy was included for what could be his final competitive games for Wales, with the striker having indicated he is unlikely to feature in the Euro 2016 qualifying campaign.

Last month's 2-1 defeat by Macedonia in Skopje ended Wales' slim hopes of qualifying for next year's World Cup finals in Brazil, with their last appearance in the latter stages of a major tournament way back at the 1958 World Cup in Sweden.

Wales squad for World Cup qualifying matches with Macedonia in Cardiff on October 11 and Belgium in Brussels on October 15:

Comments
Topics mentioned in this article
Football France Republic of Ireland Mexico South Africa FIFA Gareth Bale
Get the latest updates on ICC T20 Worldcup 2022 and CWG 2022 check out the Schedule, Live Score and Medals Tally. Like us on Facebook or follow us on Twitter for more sports updates. You can also download the NDTV Cricket app for Android or iOS.