Messi was found guilty of "having directed insulting words at an assistant referee" in the World Cup qualifier against Chile last Thursday which Argentina won 1-0 thanks to a penalty from the Barcelona hitman. 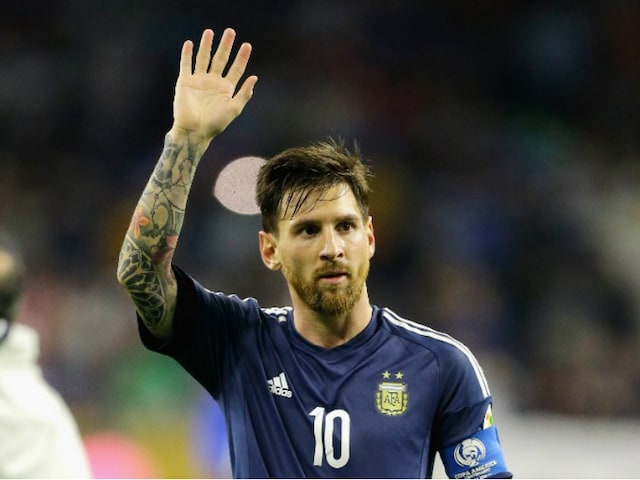 Argentina forward Lionel Messi has been banned from their next four competitive internationals starting with Tuesday's World Cup qualifier in Bolivia for swearing at a match official, FIFA said on Tuesday.

The decision means the five-times world player of the year will play in only one of Argentina's remaining five World Cup qualifiers, a severe blow to the two-times world champions who are struggling in the marathon South American campaign.

FIFA said Messi had "directed insulting words at an assistant referee" during the 1-0 win over Chile on Friday.

Messi, 29, will also miss games away to Uruguay and home to Venezuela and Peru. The Barcelona forward will be eligible again when Argentina visit Ecuador on Oct. 10.

Argentina are third in the 10-team South American group with 22 points from 13 games but have only a two-point cushion over sixth-placed Chile, with Colombia (21) and Ecuador (20) sandwiched in between.

The top four qualify directly for the tournament in Russia and the fifth side play off against a team from a different confederation for another place.

"This decision is in line with the FIFA Disciplinary Committee's previous rulings in similar cases," FIFA said.

Comments
Topics mentioned in this article
Argentina Lionel Messi Football
Get the latest Cricket news, check out the India cricket schedule, Cricket live score . Like us on Facebook or follow us on Twitter for more sports updates. You can also download the NDTV Cricket app for Android or iOS.