The football fraternity hailed AIFF's decision to revoke ban on Mohun Bagan as hundreds of fans gathered outside the club tent on Tuesday to celebrate the verdict. 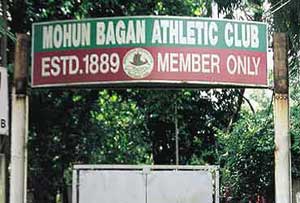 The football fraternity hailed AIFF's decision to revoke ban on Mohun Bagan as hundreds of fans gathered outside the club tent on Tuesday to celebrate the verdict.

Seventeen days after the AIFF had banned Mohun Bagan from the I-League till 2014-15, the federation, moved by a mass sentiments, on Tuesday revoked the two-year suspension while imposing a fine of Rs 2 crore for abandoning its I-League derby against East Bengal mid-way on December 9.

Olympian Chuni Goswami, who is celebrating his Platinum Jubilee birthday on Tuesday, said it is the biggest gift.

"A great coincidence that the decision has come along on my 75th birthday. It's the biggest gift I've received on my birthday. It has doubled my happiness, making my Platinum jubilee birthday really special," Goswami told PTI.

"I convey my gratitude to God for the reprieve. The AIFF has taken a right decision and showed a soft corner in view of the fans' mass appeal," he added.

Joining the chorus, Olympian P K Banerjee said, "Nothing could have been better than this decision. I'm really happy with the way AIFF handled the whole issue. It's very judiciously taken. Mr Patel has tackled it very intelligently which is seldom seen.

"By this decision, the AIFF also saved the dignity of the 125-year-old club that had brought the freedom movement (defeating an English team in the 1911 IFA Shield final). It had inspired the whole nation and the team had created some sort of an aura. So it's an unbelievably good decision."

Banerjee also hailed the decision to ban officials to represent the club in AIFF or I-League meeting.

"The officials' decision making was so immature that had led to such a situation," he said. Former captain Shyam Thapa also hailed the decision.

"We all were very sad that Mohun Bagan had been banned from the I-League. Without Mohun Bagan, something was missing in Indian football. Their age-old rivalry with East Bengal is part of the folklore. So we all are very happy with the decision. I congratulate all the fans the club."

Former player Prasanta Banerjee said, "The club is nobody's entity. It's an institution...It has given identities to so many footballers like me. So we really welcome the decision."

Fans were also elated that the AIFF was moved by their appeal.

"Million thanks to the AIFF for preserving the dignity of the club. We were living in the dark after the two years' ban. It's a new year gift for us," a fan outside the club tent said.

Asked whether they would keep their movement against the 'inept' officials alive, another fan said, "We are not against anybody. We just want our club to be there. It's nobody's club. We are really happy that we would play in the I-League again."

Another fan said their club has enough potential to avoid relegation despite the fact that Mohun Bagan would have to start from zero in the I-League.

"We have fine strikers like Tolgay Ozbey. We have enough faith in our team. Our glory days would be back soon," he said, waving the green-and-maroon flag.

Comments
Topics mentioned in this article
Football Subimal Goswami
Get the latest updates on ICC T20 Worldcup 2022 and CWG 2022 check out the Schedule, Live Score and Medals Tally. Like us on Facebook or follow us on Twitter for more sports updates. You can also download the NDTV Cricket app for Android or iOS.