Real Kashmir football club have taken the I-League by surprise and Indian football by storm. 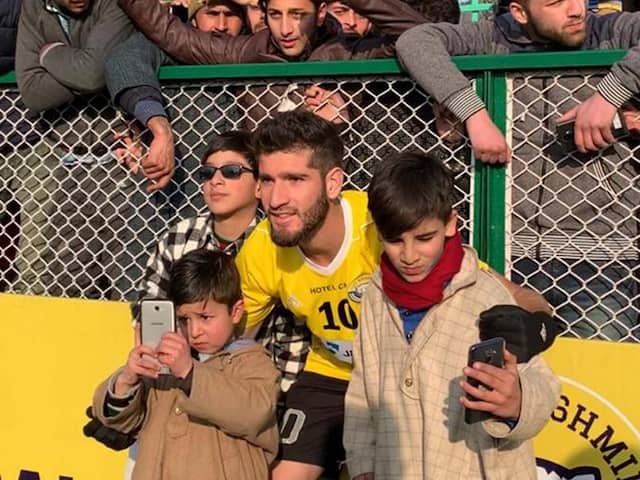 It was a tense day in Srinagar on Republic Day after a series of grenade attacks in various parts of the valley and a major encounter on the outskirts of Srinagar. But less than 500 metres from Shere-Kashmir Cricket stadium, the venue for the Republic Day parade, there is an island of happiness. At the TRC Turf Ground, football is turning fear into hope.

Welcome to 'Snow Leopards', the Real Kashmir football club -- the young players of RKFC have taken everybody by surprise and Indian football by storm. Just three years after coming into existence, making it to the prestigious I-League was in itself a major achievement and no one had ever expected that the club would defeat giants like Mohun Bagan and other strong teams in the I-league.

But the roar of the leopards is not just shifting goalposts, it's also bringing about a pleasant change in troubled valley of Kashmir.

In the lap of snow-capped Zabarwan mountains, the victory for Real Kashmir Football Club against Chennai City FC could not have been more beautiful. It's first time I-League is being held in Kashmir and the home team is just unstoppable.

The players have a hunger to win and they are on a winning spree. Victory after victory in the I-League has made Danish Farooq a new football icon and role model for the youth.

"I had never thought that I will ever get such an opportunity to play in I League. Ever since Real Kashmir was launched we stared thinking about I League and it took us 2 years to achieve the target," said Danish Farooq.

More than winning against his rivals in football, winning the hearts of the people and giving them a reason to celebrate is making Danish Farooq happy. I-League matches are attracting thousands of people in Kashmir. The stadium is packed and managing it has become a huge challenge for the police.

"We are trying our best to give some happiness to people here. I think people are very exited about these matches. People even supported when we lost matches. It's the best support any team can get," said Danish Farooq

The launch of Real Kashmir Football is in itself like a fairy tale. Two friends, Sandeep Chattoo and Shamim Meraj, a Kashmiri Pandit and a Muslim joined hands to form the club three years ago.

The bonhomie between the two is not only writing a success story for football in Kashmir, Sandeep says it also shows how Kashmir has been badly misunderstood. He says his presence among crowds of thousands and their support to a team owned by him is a message for all migrant Kashmiri pandits to come back and Kashmir is waiting to welcome them.

"Initially just as pure form of entertainment so that I could go out in the evening and play myself. But we had never thought it would come to this and we will be chasing the title. The whole idea was to play myself and I thought I will be the captain," said Shamim Meraj.

"I have been here for the last 22 years and I have been telling everybody to come back here. If I can be here so can anybody else be here. I have various businesses here and I'm perfectly alright. For me this idea sounds very funny when anybody says bring Pandits back, bring Sikhs back or bring anyone back here because I'm here so everyone can come here," said Sandeep Chattoo.

"I can launch a team. I was in the middle of the crowd. When we started the club we never thought I'm a pandit and he's Muslim," he added.

After defeating some big clubs, both Shamim and Sandeep are now aiming for the I-League title. They want the cup to come to Kashmir.

"To be very honest after defeating the undefeated we are aiming at title. It must come and it's coming home. Cup should come to Kashmir," said Sandeep.

Kashmir is reeling under extreme cold wave but sub-zero temperatures couldn't dampen the spirit of the people to cheer for their team. The excitement and happiness football brings is something they don't want miss at any cost.

Azim Bashir, an MBA graduate has come all the way from Anantnag to witness the match. Azim who runs a fertiliser business has taken days off to cheer for the team.

"Its after long time we getting chance to celebrate. We don't get a chance like this to celebrate. Business will go on but today I decided to celebrate and came here all the way from Anantnag to watch the match," said Azim Bashir.

"Actually my flight was today, I cancelled it. I'm a student of Jamia Millia. I wish the youth opt for football and also cricket - it's good for our state," said Owis Ahmad.

In Kashmir, major gatherings are seen only during funerals. Football is opening a small window for people to celebrate.

Thousands came to witness the match between Real Kashmir and Chennai football club -- every bit of the match drove the crowds crazy -- it's after a long time such a large crowd have had a reason to celebrate, even just one hour of joy means a lot

The most surprising thing for Robertson is that players here don't fatigue. He believes that the biggest thing local players lack is exposure. It's for the first time a team from Kashmir has foreign players and players from other states of India.

"When I first came here two years back - one of the issue I found is in other states of India, foreign players play. Here it's only Kashmiris who can play and they end up playing against each other.

Robertson has also brought his son Mason to play for Real Kashmir. Despite challenges due to internet shutdowns and strike calls, for Robertson Kashmir has now become a second home for his family.

"The more I have been here I feel it's like second home. It's fine team is a success, it's great. But it's people who make me feel so welcome and enjoy."

"When there is a shutdown, you can't work, I can't communicate home, apart from that it's a lovely place," he said.

After the 2010 civilian unrest in Kashmir, the government has been talking about building sports infrastructure to promote sports and channelise the energy of the youth towards sports.

The government says it will be building indoor stadiums in all districts of the state and over Rs 300 crore has been sanctioned to build sports facilities.

Lone Star was the first football club from Kashmir which made it to 2nd division I-League in 2016 but it could not qualify for the top league matches. Changing life in Kashmir through sports has been an effort for several years. After decades of turmoil and gloom, football is bringing people together.