A blazing second-half performance saw Inter Milan come back from a goal down to crush Genoa 5-2 at the San Siro and stay five points behind leaders AC Milan on a Sunday when fading Napoli dropped more points. 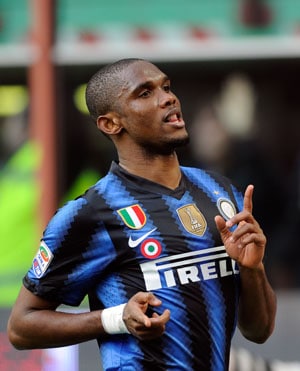 A blazing second-half performance saw Inter Milan come back from a goal down to crush Genoa 5-2 at the San Siro and stay five points behind leaders AC Milan on a Sunday when fading Napoli dropped more points.

A brace from the brilliant Samuel Eto'o and one goal each from Giampaolo Pazzini, Goran Pandev and Yuto Nagatomo - all in the second half, cancelled out Rodrigo Palacio's 40th-minute opener for Genoa before the visitors scored a last-minute consolation through Mauro Boselli in an end-to-end game.

Third-placed Napoli's own title challenge appears to have run out of steam after the Azzurri were held to a goalless draw by lowly Brescia at the San Paolo where coach Walter Mazzarri was sent from the dugout in the first half for protesting.

In Udine, Antonio Di Natale's second-half penalty, his 22nd goal of the campaign, gave Udinese a 1-0 win over rock-bottom Bari, temporarily taking them fourth ahead of Lazio's evening match against Palermo.

Eto'o was in the thick of things from the start in Milan. Playing to the left of Pazzini, the Cameroonian tested Eduardo on 20 and 35 minutes with right-foot drives.

Genoa though had come to play and after the stretching Alberto Paloschi shot into the side-netting, the visitors took the lead when fellow forward Palacio fired a rasping crosshot into the corner after being found by the creative Abdoulay Konko.

On 50 minutes, Eto'o fed Maicon whose cross was side-footed home by Pazzini. A minute later Eto'o slotted home after Pandev's shot had been fumbled by Eduardo.

Six minutes on and Eto'o robbed the ball, slipped inside another challenge before poking past Eduardo for a brilliant individual effort and his 18th goal of the season.

Pandev, who had gone close following two mazy runs, made it 4-1 after 68 minutes with his second goal of the season after Eto'o and Sneijder had combined to tee him up.

With the hosts flying forward at every opportunity, Nagatomo swivelled on the penalty spot to fire home left-footed for his first Inter goal before Boselli's late header made it 5-2.

Elsewhere, Adrian Mutu struck a first-half brace to help mid-table Fiorentina to a 3-0 win over Catania at the Artemio Franchi stadium.

A first-half penalty from Marco Di Vaio, his 18th goal of the season, helped Bologna to a 2-2 draw against Cagliari, who stay ninth.

Earlier Sunday, two goals from Emanuele Giaccherini helped Cesena to a 3-2 win at struggling Sampdoria and above the drop zone.

On Saturday, a goal from Gennaro Gattuso saw Milan defeat a sorry Juventus side 1-0 to claim their seventh win in 2011, while a last-minute penalty from David Pizarro gave Roma a confidence-boosting 2-1 win at in-form Lecce on Friday.

Comments
Topics mentioned in this article
Genoa Football Inter Milan
Get the latest updates on ICC T20 Worldcup 2022 and CWG 2022 check out the Schedule, Live Score and Medals Tally. Like us on Facebook or follow us on Twitter for more sports updates. You can also download the NDTV Cricket app for Android or iOS.