Louis Van Gaal, who will take over at English Premier League giants Manchester United after the tournament, has named five players from Feyenoord in the Netherlands squad, the most from any club. 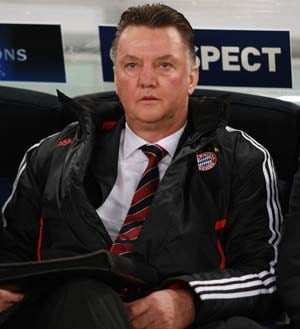 Dutch coach Louis van Gaal will be looking to his experienced trio of Wesley Sneijder, Arjen Robben and Robin van Persie to engineer a second successive appearance in the World Cup final after he named his definitive 23-man squad on Saturday.

Van Gaal, who will take over at English Premier League giants Manchester United after the tournament, has also included other veterans such as striker Dirk Kuyt and Klaas van Huntelaar, who normally plays second fiddle to van Persie.

However, van Gaal, who established himself as a top level coach in guiding a young Ajax side to the 1995 Champions League trophy, has also included a lot of young home-based talent for the finals in Brazil for which they qualified with ease winning nine and drawing one of their qualifying games.

There are 10 players from the Dutch championship including five from league runners-up Feyenoord, the most from any individual club.

Van Gaal, who is in his second spell as national coach having been sacked when they failed to reach the 2002 World Cup finals, dashed five players' dreams of making the squad as he left out Karim Rekik, Tonny Vilhena, Quincy Promes, Jean-Paul Boetius and Jeroen Zoet.

Van Gaal's squad, though, has been weakened by the absence through injury to another veteran, Rafael van der Vaart, French champions Paris Saint Germain defender Gregory van der Wiel and AS Roma playmaker Kevin Strootman, who was considered by van Gaal as one of the three indispensable players in his World Cup plans, the other two being Robben and van Persie.

The Dutch, who play fellow Brazil-bound side Ghana later on Saturday in a friendly in Rotterdam, have been drawn in perhaps the toughest of the groups, Group B, which sees them face defending champions Spain, who beat them 1-0 in the final in 2010, highly-rated South American outfit Chile and Australia.