Gianni Infantino awarded the inaugural edition of its expanded 24-team Club World Cup to China after a meeting in Shanghai of the FIFA Council. 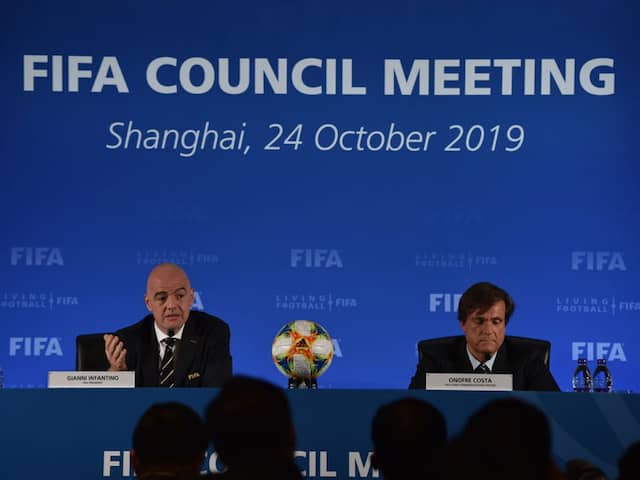 Gianni Infantino confirmed that China was the only country being considered to host Club World Cup.© AFP

FIFA has awarded the inaugural edition of its expanded 24-team Club World Cup to China, the association's president Gianni Infantino said Thursday in what he called a "historic decision". The move underlines China's growing clout in football and could be a precursor to the country eventually hosting the World Cup proper. Infantino made the announcement after a meeting in Shanghai of the FIFA Council, the decision-making unit of football's world governing body. It will mean many of the biggest club teams in football -- and their array of stars -- descending on China in two years' time.

Infantino confirmed that China was the only country being considered.

"It is a historic decision for football," he said. "It will be a competition which every person, every child and everyone who loves football is looking forward to."

The FIFA chief said in June that his new Club World Cup could generate as much as $50 billion in commercial income, although he did not state how many editions that would cover and a source told AFP the figure was "scarcely credible".

The current Club World Cup features seven teams including the holders of the UEFA Champions League. Qatar will host the competition this year and in 2020.

The Gulf state will use the two tournaments as logistical tests for stadiums and infrastructure ahead of the 2022 edition of the World Cup, FIFA's flagship international competition.

FIFA also will double funding for women's football to $1 billion over the next four years, Infantino said.

"The Council decided to put 500 million in addition to the 500 million already budgeted," he said.

The plan for a revamped 24-team Club World Cup starting in June-July 2021 was approved at a FIFA Council meeting in Miami in March despite opposition from UEFA and the powerful European Club Association.

Infantino said on Thursday that tournament would include eight teams from Europe.

The tournament will take place every four years and replaces the Confederations Cup, an international competition that acted as a test event for countries hosting a World Cup.

China, the world's second-biggest economy, is becoming increasingly influential in football under President Xi Jinping, a known fan of the game.

Xi and his communist government have made the sport a national priority and his stated aim is for the country of 1.4 billion to host and eventually win a World Cup.

A bid for the 2030 World Cup has long been mooted.

Mark Dreyer, a Beijing-based expert in China's sports industry, said that the country has a proven track record in staging major sporting events and views a World Cup as the ultimate aim.

But Dreyer, founder of the China Sports Insider website, added: "I worry from China's perspective whether the other competing bids (for 2030) will use this (hosting the Club World Cup) against China and say they already have something from FIFA and have rewarded the country for its financial support, so give the World Cup to someone else."

Infantino stepped carefully when asked about questions that could be raised over China's human rights record as a result of the Club World Cup decision.

He also was asked whether players coming to China may have to self-censor, after the US National Basketball Association was hit by a Chinese backlash over comments by a Houston Rockets team executive who expressed support for Hong Kong protesters resisting Chinese control.

"Everyone can say what they want," he said.

"As far as we are concerned, we are trying to use football as a catalyst for positive, and never for negative."