Liverpool had led 1-0 at the break after James Milner converted from the penalty spot but Everton looked to have secured a replay when Gylfi Sigurdsson equalised midway through the second half. 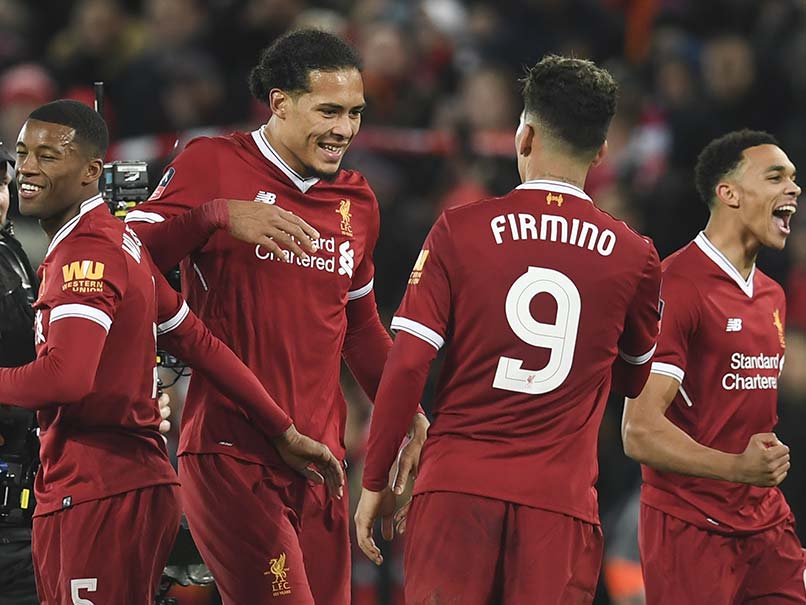 Virgil van Dijk scored a dramatic late winner on his debut as Liverpool clinched a 2-1 victory over Everton in a heated Merseyside derby FA Cup tie at Anfield.

Liverpool had led 1-0 at the break after James Milner converted from the penalty spot but Everton looked to have secured a replay when Gylfi Sigurdsson equalised midway through the second half.

But Van Dijk, who became the world's most expensive defender when he joined the Reds from Southampton, headed home six minutes from time in the 230th meeting between the sides.

"What a night," said the Dutch defender. "It was thoroughly deserved, it felt amazing to be out there, the goal is very special for me and my family.

"Playing at Anfield for Liverpool is a dream for every player. To score a goal is even more special."

Liverpool manager Jurgen Klopp handed a debut to record £75 million ($102 million, 85 million euros)signing Van Dijk as he selected arguably his strongest available starting line-up, in contrast to the 1-1 draw in the Premier League played out by the sides in December.

Brazil playmaker Philippe Coutinho was again ruled out with a thigh injury as speculation continues to mount over his future amid interest from Barcelona, while top-scorer Mohamed Salah was missing with a groin problem.

Everton, who confirmed the sale of midfielder Ross Barkley to Chelsea in the hours leading up to the match, were also at full strength.

The atmosphere in the stands crackled and on the pitch it was equally feisty. Wayne Rooney scythed down Joe Gomez early on and was shown a yellow card.

Chances, though, were at premium in the first half as Liverpool dominated possession.

The breakthrough came five minutes after the half-hour mark when Liverpool were awarded a penalty by referee Bobby Madley.

Everton defender Mason Holgate used his arms on Adam Lallana, who had his back to goal inside the area, and the Liverpool midfielder went to ground.

Milner made no mistake with the spot-kick as he dispatched the ball past Everton goalkeeper Jordan Pickford with confidence.

Klopp felt it was not a spot-kick.

"It was a similar situation (to the penalty against Liverpool for Everton last month), the first one was no penalty in my opinion and this one wasn't also," he said. "It's the same. There is contact and the referee used his whistle. Exactly the same situation."

Tempers flared when Roberto Firmino was pushed into the advertising hoardings by Holgate before referee Madley stepped in to prevent the incident escalating further following an angry exchange of words.

Everton manager Sam Allardyce was more positive with his approach than the fixture last month, although the visitors found Liverpool's defence, marshalled by Van Dijk, resilient and were unable to register a shot on target in the first half.

Rooney wrestled with Emre Can shortly after the break and perhaps fearing a red card was in the offing, Allardyce withdrew the experienced forward.

Liverpool continued to carve out chances but were unable to provide the decisive touch and Everton hit them with an equaliser on the counter attack.

Yannick Bolasie won possession and found Rooney's replacement Ademola Lookman, who showed superb awareness to break forward before he found Phil Jagielka on the edge of the box.

Rather than shoot himself the defender laid the ball off for Sigurdsson, who calmly stroked the ball into the bottom corner of the net past the flat-footed Loris Karius.

However, Liverpool sealed passage to the fourth round -- and their first win in five attempts on home turf against the Toffees in the competition -- with a dramatic goal in the dying minutes.

Alex Oxlade-Chamberlain's curling delivery was met by Van Dijk, who towered above Jagielka and powerfully headed home in front of the Kop with Everton goalkeeper Pickford partially at fault as he failed to punch clear.

Comments
Topics mentioned in this article
Liverpool Everton Virgil Van Dijk Football
Get the latest updates on ICC T20 Worldcup 2022 and CWG 2022 check out the Schedule, Live Score and Medals Tally. Like us on Facebook or follow us on Twitter for more sports updates. You can also download the NDTV Cricket app for Android or iOS.