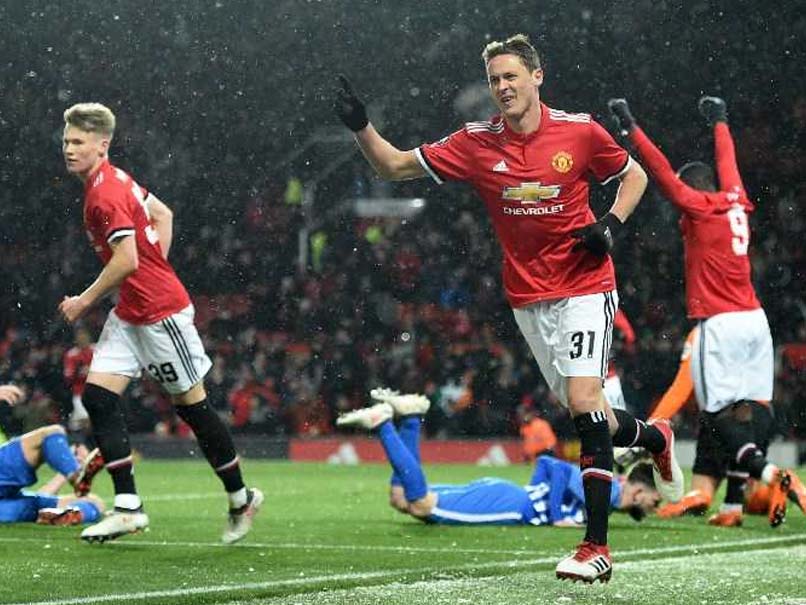 Manchester United bounced back from being dumped out of the Champions League in midweek by reaching the FA Cup semi-finals despite another uninspired performance as goals from Romelu Lukaku and Nemanja Matic saw off Brighton 2-0 on Saturday. Tottenham Hotspur also booked their place in the last four in more emphatic fashion thanks to Christian Eriksen's double in a 3-0 win at Swansea City to make light of Harry Kane's absence through injury. United manager Jose Mourinho reacted to the criticism of his cautious approach in losing 1-2 at home to Sevilla on Tuesday by making five changes, with star names Alexis Sanchez and Paul Pogba among those left on the bench.

And it was two of Mourinho's most trusted soldiers that provided rare moments of inspiration at a snow-covered Old Trafford.

The Portuguese coach singled out Lukaku and Matic for praise on Friday in a staunch defence of his record since taking charge of United.

The two combined for the hosts' opener eight minutes before half-time as Lukaku powered home the 25th goal of his debut season at the club from the Serb's inch-perfect cross.

Brighton had plenty of chances to get back in the game after the break as Pascal Gross fired inches wide and Jurgen Locadia forced stand-in United goalkeeper Sergio Romero into a save that established number one David de Gea would be proud of.

But they were made to pay for their profligacy as Matic headed home Ashley Young's free-kick eight minutes from time to ensure the 12-time winners will be present for the semi-finals at Wembley in five weeks' time.

Earlier, Spurs proved they can thrive without Kane as Eriksen's double either side of Erik Lamela's second goal of the season sent them into the last four.

With talismanic striker Kane sidelined for several weeks due to ankle ligament damage, Mauricio Pochettino's side received an inspirational performance from Eriksen at the Liberty Stadium.

"Eriksen was fantastic, so important for us," said Spurs boss Pochettino.

"Every season he takes one step up, today he was fantastic. He is so consistent."

Tottenham, chasing their first silverware under Pochettino, are back in the Wembley semi-finals after losing to Chelsea at that stage of the competition last season.

And the Argentine hailed the depth of his squad without Kane and with Dele Alli featuring as just a late substitute.

"If you watch the last three games, we won with a different starting eleven and now today too," he said.

"What is important is that everyone is available to play and the team is not affected by the names. We keep the same way, the same dynamic and that is so important."

Swansea never got going on a freezing afternoon in south Wales and can now concentrate on trying to preserve their Premier League status.

The visitors went ahead in the 11th minute through a wonderful strike by Eriksen as the Dane curled the ball past Kristoffer Nordfeldt from the edge of the box.

Lamela produced an equally impressive finish in first-half stoppage time as the Argentinian skipped past Tom Carroll and calmly passed the ball into the corner of the goal before Nordfeldt had time to move.

Just past the hour, Spurs sealed the victory when the hard-working Lucas Moura played the ball back to Eriksen, who claimed a deserved second goal with a low shot from the edge of the box that had sufficient power to go through Nordfeldt's hands.

Comments
Topics mentioned in this article
Manchester United Tottenham Hotspur Brighton & Hove Albion Swansea City Romelu Lukaku Nemanja Matic Christian Eriksen Football
Get the latest updates on SA vs IND 2021-22, check out the Schedule and Live Score . Like us on Facebook or follow us on Twitter for more sports updates. You can also download the NDTV Cricket app for Android or iOS.