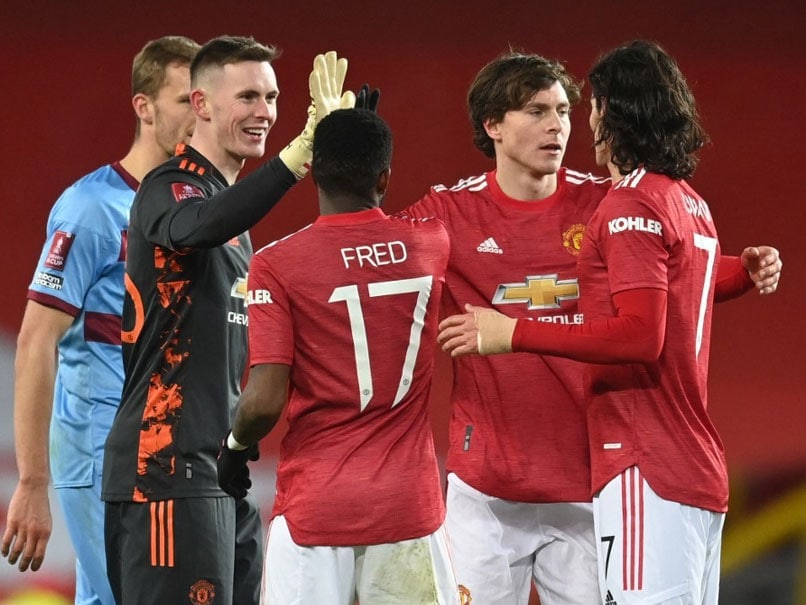 Ole Gunnar Solskjaer warned "wasteful" Manchester United to be "more clinical" after they edged into the FA Cup quarter-finals with a hard-fought 1-0 win against West Ham on Tuesday. Solskjaer's side were well below their best in a scrappy fifth round tie at freezing, snow-dusted Old Trafford. But a fine finish from Scotland midfielder Scott McTominay ensured United advanced to the last eight for a seventh successive season. United last won the FA Cup in 2016 and McTominay's third goal in three games kept them in the hunt to lift the trophy for the 13th time.

After the frustration of the late Everton equaliser that dented their Premier League title challenge on Saturday, this was an essential result to lift the mood at United.

It was hardly an eye-catching performance however, with United labouring against defensive West Ham until McTominay and Bruno Fernandes were introduced as second half substitutes.

"When it's only 1-0 and we are wasteful, anything can happen to us. We knew that from the last game," Solskjaer told BBC Sport.

"I think we got about 15 to 17 shots in the end but we need to be more clinical. We should have finished the game off earlier."

"We needed to have a good result and a good feeling after today because we were low after Everton game."

"We are in the hat and that's what we wanted. We want to challenge and we want to go to the final. That's what we're here at Man United for."

Amad Diallo was named on the United bench for the first time since the 18-year-old's January move from Atalanta as Solskjaer made six changes.

Lukasz Fabianski prevented United from taking the lead in the 27th minute when he brilliantly pushed Victor Lindelof's header onto the post.

There was a nasty clash of heads between West Ham's Issa Diop and United's Anthony Martial towards the end of the first half.

Both continued after treatment but Diop did not return in the second half due to concussion.

"To clarify, Issa Diop was replaced as a concussion substitute, meaning we can now make a total of six changes, as can Manchester United, if we see fit," West Ham said in a statement.

Fabianski saved well from Marcus Rashford before the game went into extra-time.

McTominay finally made the breakthrough in the 97th minute.

Martial's cross was only half-cleared and Rashford's deft touch teed up McTominay to steer a composed strike past Fabianski from just inside the area.

In Tuesday's other fifth round tie, Burnley suffered a surprise exit as second tier Bournemouth won 2-0 at Turf Moor.

Sean Dyche's side fell behind to Sam Surridge's first half goal and Junior Stanislas finished them off with a late penalty.

While the loss was embarrassing, it will be forgotten if Dyche ensures Burnley retain their Premier League status.

Burnley are currently 17th in the Premier League, sitting eight points clear of the relegation zone.

It could have been an even more chastening night for Burnley, who initially included the ineligible Erik Pieters in the team before being alerted to the issue by Bournemouth's media chief.

Dutch defender Pieters was banned after collecting bookings in the previous two rounds of the competition.

Pieters was replaced just before kick-off by Anthony Driscoll-Glennon, saving Burnley from a potential FA investigation.

"The rules have changed this year with the booking situation and the number of games in the FA Cup. It was just a clear oversight," Dyche said.

"To be fair to Bournemouth, they flagged it and mentioned it, so credit to them for a bit of gentlemanly conduct. We jumped on it straight away and people at our club held their hands up in the right slots."

Bournemouth Football
Get the latest updates on ICC Women's Cricket World Cup 2022 and IPL 2022, check out the Schedule , Live Score and IPL Points Table. Like us on Facebook or follow us on Twitter for more sports updates. You can also download the NDTV Cricket app for Android or iOS.