Gerard Deulofeu came off the bench to spark an incredible comeback as Watford beat Wolves 3-2 to set up an FA Cup final against Manchester City. 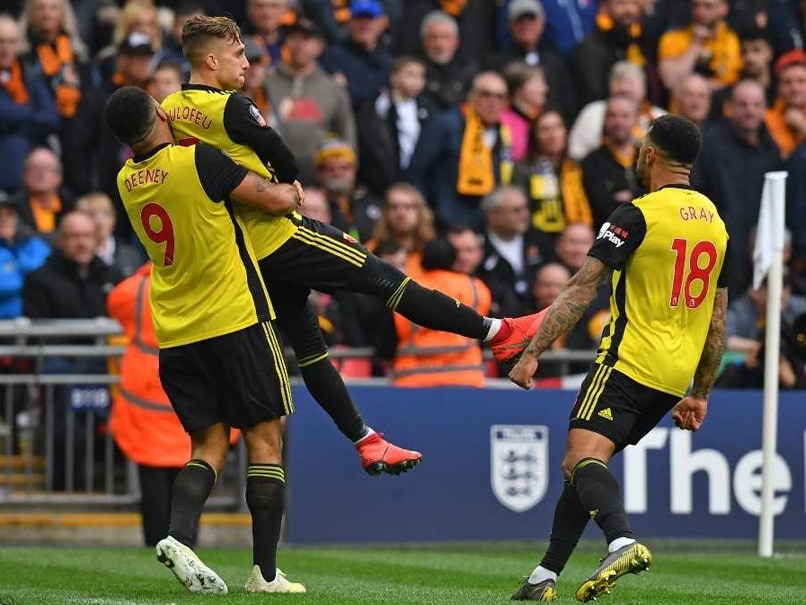 Gerard Deulofeu scored in the 79th and 104th minute in the FA Cup semi-final between Watford vs Wolves.© AFP

Javi Gracia hailed "angry" Gerard Deulofeu after the Spaniard came off the bench to spark an incredible comeback as Watford beat Wolves 3-2 to set up an FA Cup final against mighty Manchester City. Gracia's side looked down and out at Wembley on Sunday, trailing 2-0 late in normal time before a moment of magic from Deulofeu and a nerveless last-gasp penalty from captain Troy Deeney pulled them level. Earlier, a goal from Matt Doherty in the first half and a second-half strike from Raul Jimenez had seemingly set Wolves on the path to their first FA Cup final since 1960 in a full-blooded cup tie.

Wolves picked themselves up after the penalty and settled quickly at the start of extra time.

But the momentum was with a physical Watford side and they took the lead for the first time in the match in the 104th minute after more brilliance from Spaniard Deulofeu, who rolled the ball past John Ruddy from a tight angle after holding off Conor Coady.

"When everything was lost I think the team was able to show our character, our personality, our ambition and believing until the end we were able to win today," said a proud Garcia.

The Watford manager said he knew Deulofeu would have an important role to play.

"At that moment I think he was angry when he started to play but I like to see my players this way with that attitude when they felt angry in this moment to show what they are able to do," he said.

'Best of the rest'

Watford and Wolves are battling to be the "best of the rest" in the Premier League behind the so-called 'Big Six' but on Sunday the focus of both clubs switched to the chance to win rare silverware.

Both teams struggled to find their rhythm during a scrappy opening spell with little in the way of clear-cut openings.

Wolverhampton-born Andre Gray wasted a clear chance just after the half-hour mark, lifting Deeney's cross over the crossbar from six yards after escaping the Wolves defence.

Minutes later Heurelho Gomes did well to tip over a drive from Leander Dendoncker as Wolves poured forward.

From the resulting corner, the ball was played short to Diogo Jota, who sent over an inviting cross that Doherty headed in to give Wolves a 36th-minute lead.

Gray had another glorious chance to equalise on the stroke of half-time but Wolves captain Coady threw himself in front of a powerful shot to ensure his side went into the break in front.

Wolves gave Watford a mountain to climb when Jimenez -- the club's new record signing -- hooked the ball past Gomes after controlling a deep cross from Doherty in the 62nd minute.

Watford huffed and puffed as they battled to get back into the game but Deulofeu, brought on in place of Will Hughes in the 66th minute, produced a moment of pure inspiration in the 79th minute.

The ball fell to him in the area and he picked his spot, chipping delicately over the head of Ruddy into the top corner, leaving the goalkeeper rooted to the spot.

With time running out, Dendoncker was adjudged to have brought down Deeney in the penalty box and referee Michael Oliver pointed to the spot after a moment's consideration, with the spot-kick confirmed by VAR.

Deeney held his nerve and blasted the ball down the middle in the 94th minute, with Ruddy unable to keep it out.

That took the game to extra time and Deulofeu applied the killer touch shortly before the end of the first period of extra time to send Watford through to next month's final against quadruple-chasing Manchester City.

Wolves manager Nuno Espirito Santo, whose side beat Manchester United in the last round, described "a moment of real pain and disappointment".

"The feeling that we had is that we had it and it got away from us," he said. "We have to look at it. We have to realise that in the last minutes of the game we should have managed better."

Manchester City Football
Get the latest updates on IND vs NZ 2021, check out the Schedule and Live Score . Like us on Facebook or follow us on Twitter for more sports updates. You can also download the NDTV Cricket app for Android or iOS.