Jack Wilshere said Arsenal can take confidence from their Europa League semi-final draw against Atletico Madrid, despite the frustration of conceding a late away goal. 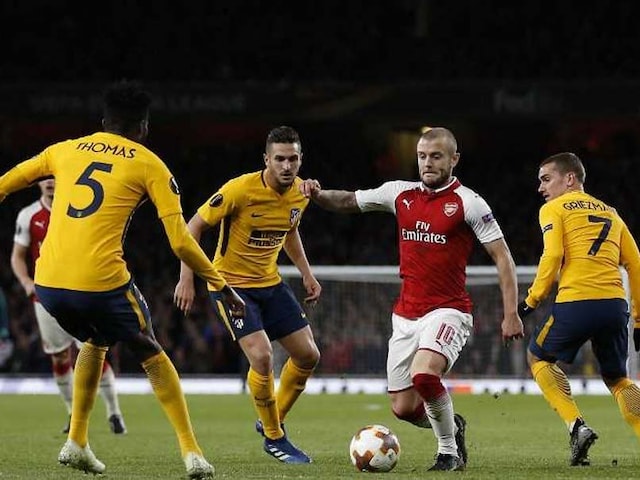 Jack Wilshere says Arsenal can take confidence from their Europa League semi-final draw against Atletico Madrid, despite the frustration of conceding a late away goal. With the visitors on the back foot for much of Thursday's first-leg contest at the Emirates Stadium following Sime Vrsaljko's early dismissal, the Gunners dominated the game and looked set to take a lead to Madrid next week when Alexandre Lacazette headed them in front. But Antoine Griezmann capitalised on weak defending to convert a late equaliser and secure a 1-1 draw.

Diego Simeone's side have lost only twice at home since moving to the Wanda Metropolitano last summer, one of those a Champions League group game against Chelsea.

Atletico have also gone 11 home games without conceding a goal, and Arsenal head to Spain needing two to win the game.

But, ahead of what could be Arsene Wenger's last European match in charge as he prepares for the end of his 22-year reign in the summer, Wilshere believes there is reason for Arsenal to be positive.

"It was definitely not the result we wanted but the performance was good and we have got to take confidence from that and take that into the away fixture," the midfielder said.

"It is half-time. We cannot be too disappointed. We created a lot of chances. If we create chances and put them away then we have got a chance."

Arsenal travel to Old Trafford to face Manchester United in the Premier League on Sunday but, with a top-four berth seemingly out of reach, Wenger will be focused on which players will feature in the Spanish capital four days later.

"Atletico are a team that know how to make you suffer," he said. "They know how to create chances and score goals.

"It's only 1-1, though, and the tie is still open. We know it will be hard playing in their stadium but there are positives that we can take."

Comments
Topics mentioned in this article
Arsenal Atletico Madrid Jack Wilshere Football
Get the latest Cricket news, check out the India cricket schedule, Cricket live score . Like us on Facebook or follow us on Twitter for more sports updates. You can also download the NDTV Cricket app for Android or iOS.