Ernesto Valverde On The Brink As Barcelona Consider Their Options

Barcelona's open hankering after Xavi has left a bitter taste, particularly with those who believe Ernesto Valverde, who always speaks with sense and integrity, deserves better. 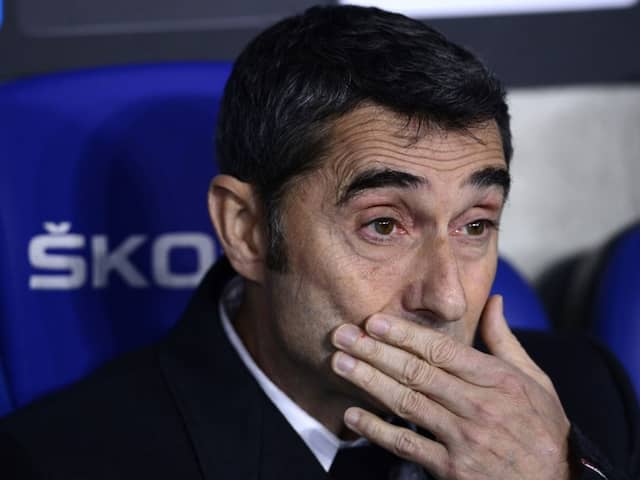 Ernesto Valverde took training on Monday morning but his future as Barcelona coach looks bleak, with the club expected to make a decision on his position later in a board meeting, a club source confirmed. Valverde arrived more than two hours early at the Ciutat Esportiva Joan Gamper and took training as usual, despite Barca's public pursuit of their iconic former midfielder Xavi Hernandez at the weekend. Xavi, currently the coach of Qatari team Al-Sadd, has indicated he is not prepared to take charge immediately but the negotiations have left Valverde in limbo.

A board meeting is planned for 2pm local time (1300 GMT) on Monday, when Valverde's position will be discussed.

If the decision is to remove him straight away, Barca could install a temporary replacement like B team coach Francisco Javier Garcia Pimienta, perhaps with a view to appointing Xavi at the end of the season.

Otherwise, they could opt for a more permanent solution immediately. Former Tottenham Hotspur coach Mauricio Pochettino is a viable option, despite his previous claims he would never coach Barcelona due to connections with rivals Espanyol.

Ex-Real Betis coach Quique Setien, renowned for an attractive, attacking style of play, is out of work and has also been mentioned as a possible candidate.

Barcelona's open hankering after Xavi has left a bitter taste, particularly with those who believe Valverde, who always speaks with sense and integrity, deserves better.

"I feel bad for Valverde, he doesn't deserve this treatment," former Barcelona coach, and current Manchester City boss, Pep Guardiola said on Sunday. "I hope the situation can be resolved soon."

Barcelona sit top of La Liga, level on points with Real Madrid, and they face Napoli in the last 16 of the Champions League next month, after sailing through top of their group.

Yet scepticism around Valverde's suitability has long been building, with every loss prompting renewed speculation about his future.

Underpinning the doubts are Barca's last two exits from the Champions League, after the team followed an incredible collapse against Roma in 2018 with a remarkably similar capitulation against Liverpool last year.

Given the obsession with bolstering their record in Europe, many were surprised the club did not opt for a fresh start last summer, even if Valverde's domestic record has been excellent.

In his two completed seasons, Barca have won two La Liga titles, as well as the Copa del Rey in 2018, and another league title remains very much in sight this term, despite second-placed Madrid's impressive form in recent weeks.

But Barcelona's performances have been unconvincing -- they have drawn three of their last four league games -- and the flaws in the Spanish Super Cup semi-final loss to Atletico Madrid on Thursday, in which they conceded two late goals, felt all too familiar.

There have also been lingering concerns about a more pragmatic style of play, which for some has veered too far from the club's possession-football DNA.

Nostalgia remains for the brilliance of Guardiola's side, even if most of the players he was blessed with have gone.

When Valverde arrived to succeed Luis Enrique in 2017, Barcelona were wounded, hurting after the shock departure of Neymar to Paris Saint-Germain and humiliated, as consecutive defeats by Real Madrid in the Spanish Super Cup hinted at trouble for the season ahead.

Instead, Valverde steadied the ship and galvanised the team.

They lost one league game en route to winning the title and the year after, they won again, finishing 11 points ahead of Atletico and 19 clear of Real.

Increasingly, though, Valverde's achievements have faded from view and his failures then began to overshadow them, leaving Barcelona to consider that his time might be up.

Xavi Football
Get the latest updates on IPL 2020, check out the IPL Schedule for 2020 and Indian Premier League (IPL) Cricket live score . Like us on Facebook or follow us on Twitter for more sports updates. You can also download the NDTV Cricket app for Android or iOS.