EPL: Ashley Young could be on sidelines due to shoulder injury

Ashley Young hurt his shoulder in a collision with Tottenham goalkeeper Hugo Lloris that Moyes insisted should have led to a penalty for his side. 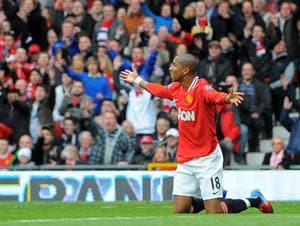 Manchester United manager David Moyes has admitted that winger Ashley Young is set for a spell on the sidelines with an injury suffered in the New Year's Day defeat to Tottenham Hotspur.

Young hurt his shoulder in a collision with Tottenham goalkeeper Hugo Lloris that Moyes insisted should have led to a penalty for his side.

The former Aston Villa player landed awkwardly as he leapt over Lloris and will certainly miss this weekend's FA Cup third-round meeting with Swansea City.

"Ashley has got an injury that is going to keep him out for some time," said Moyes.

"It is a shoulder injury he received in the challenge by the goalkeeper. I am not sure how long it will be."

Meanwhile, Moyes offered no further update on the fitness of Robin van Persie, who has missed six games with a thigh injury.

"We will let you know when he is ready," said the Scot.

Comments
Topics mentioned in this article
Football Alex Ferguson Wayne Rooney Ashley Young Liverpool Chelsea Arsenal Manchester United
Get the latest Cricket news, check out the India cricket schedule, Cricket live score . Like us on Facebook or follow us on Twitter for more sports updates. You can also download the NDTV Cricket app for Android or iOS.