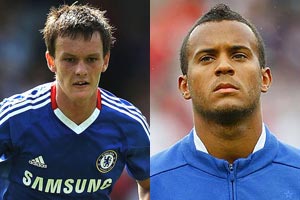 McEachran is regarded as one of the best prospects to emerge from Chelsea's youth academy for years and many pundits expect him to play a significant role under new Blues boss Andre Villas-Boas.

The 18-year-old was part of Chelsea's FA Youth Cup-winning side in 2010 and has so far made 17 first-team appearances, including four starts.

McEachran hopes to feature more often this season and told the club's website: "I need to keep working. This season my target is just to play more minutes. Hopefully I will play more games and keep improving."

Bertrand joined Chelsea from Gillingham in July 2005 and had loan spells with Norwich City, Reading and Nottingham Forest before making his Chelsea debut as a substitute against Birmingham City in April.

The defender is competing with Ashley Cole for the left-back berth and he knows it will be a tough challenge to become a first-team regular.

"Obviously Ashley Cole is number one left-back but hopefully I can get a game here and there," he said.

"I am aiming to get a few more games. I hope to stay here this season and hopefully catch the manager's eye."

"It's refreshing to have the new manager come in. I am looking forward to listening and learning from him."

"I can see the manager is young and hungry and wants to take the club forward so I want to be part of that and I thought it was best for me to stay."