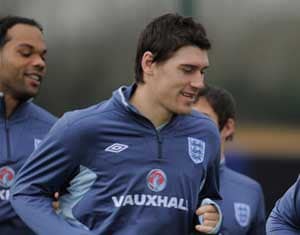 Capello has tried to rule England's squad with an iron fist since taking charge of a group who had been over-indulged by previous boss Steve McClaren.

The Italian's no-nonsense approach included banning mobile phones from team dinners, limiting the squad's leisure activities and insisting that players are on time for every meeting.

Initially Capello's hardline stance was seen as a positive step but Manchester City midfielder Barry believes it backfired at last year's World Cup when the players became bored by the daily grind of training and resting with little chance to enjoy the sights of South Africa.

However, Barry, who is set to feature in Saturday's Euro 2012 qualifier against Wales in Cardiff, claims England's players no longer fear Capello so much and he believes that is a good thing as it makes international duty more enjoyable.

"Speaking to a few other players at the World Cup, they were allowed to go around the town for a couple of hours," Barry said.

"The Dutch seemed pretty relaxed according to Nigel de Jong. That was the main difference. Maybe we were just on top of each other a bit much.

"On the training pitch nothing has really changed. If there is anything not right the manager is still stamping down on it, but maybe around the hotel it is a bit more relaxed.

"The players just seemed a bit more relaxed around the manager. When he first came in there was a bit more pressure on the players to be everywhere at the right time.

"Players used to turn up 20 minutes before meetings. Those rules are still there and the players still respect them, but they aren't on their toes and looking over their shoulders all the time to see if the manager is watching.

"Nothing has been said (by the manager). The players took it on themselves to say we can relax a bit more.

"The manager isn't going to be on us, trying to force things, so we can enjoy it more."

Barry was the last player to wear the England captain's armband in the second half of last month's friendly against Denmark, but that privilege is now back with John Terry after Capello's decision to restore the Chelsea star as skipper in place of the injured Rio Ferdinand.

Capello's rather messy handling of the move has led to claims that England's dressing room could be divided into factions supporting both players.

Barry could have been one of the players in Ferdinand's corner after Terry's alleged affair with Wayne Bridge, a team-mate of Barry's at City before his loan move to West Ham.

But he believes the squad are all behind their new leader. "The decision has been recognised by the players and we are all pretty comfortable with it," Barry said.

"If you are unhappy you have to be brave enough to say something, but the manager asked the question and nothing was said.

"We are comfortable with John being made captain. He did a great job before and I'm sure he can continue that."

Capello came under fire after England drew their last qualifier against Montenegro, but Barry insists a victory against Wales would show the Italian still retains the squad's support.

"As a group we took responsibility for the World Cup and it's been a pretty solid start to the Euro qualifying," Barry added.

"If we win on Saturday the confidence will still be there and we fully back the manager."

Comments
Topics mentioned in this article
Football Gareth Barry John Terry England
Get the latest updates on ICC T20 Worldcup 2022 and CWG 2022 check out the Schedule, Live Score and Medals Tally. Like us on Facebook or follow us on Twitter for more sports updates. You can also download the NDTV Cricket app for Android or iOS.