The sides' first meeting since Germany's bruising 4-1 win in the last 16 at the 2010 World Cup in South Africa was decided by a 39th-minute header from Arsenal defender Per Mertesacker. 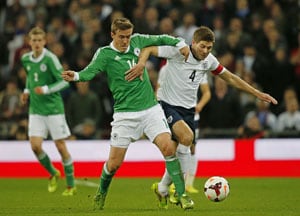 Germany procured a smash-and-grab 1-0 victory over England in a friendly at Wembley on Tuesday, consigning their old rivals to successive home defeats for the first time since 1977.

The sides' first meeting since Germany's bruising 4-1 win in the last 16 at the 2010 World Cup in South Africa was decided by a 39th-minute header from Arsenal defender Per Mertesacker.

Roy Hodgson's England had opportunities to equalise, notably when Andros Townsend hit the post in the second half, but after Friday's 2-0 loss to Chile at the same venue, they end the year with a pair of defeats.

"The effort, the work-rate, the desire I can't fault, but for all the time we had the ball, we weren't as efficient as the Germans were.

"We had some good movement, but the quality of our passing was not as good as theirs. We were a small team today and they scored from the second corner they had.

"We learnt a lot, both positively and negatively, but we had a lot of people coming to watch us in these two games and we haven't sent them home with a smile on their face."

Germany have now won on their last six visits to England -- including a penalty shoot-out success at Euro 96 -- and will look ahead to 2014 with their status as serious World Cup contenders intact if not enhanced by a polished but unspectacular performance.

"The fact that we won here at this time-honoured place is a source of joy for us," said Germany coach Joachim Loew.

"Over the 90 minutes we deserved to win this game. We had a good grip on the game. What we missed was converting a few chances on the break, especially in the second half, to seal the game earlier than we did."

Both sides made wholesale changes to their starting XIs -- nine for England, eight for Germany -- but while the hosts welcomed back several first-choice players, the visitors' line-up was more experimental.

Borussia Dortmund goalkeeper Roman Weidenfeller was awarded a first cap, while Borussia Moenchengladbach's Max Kruse led the line, and England seemed eager to exploit any unfamiliarity in their opponents' ranks.

Their final ball frequently let them down, however, and after Wayne Rooney, Steven Gerrard and Phil Jagielka had all failed to find the target with attempts at goal, Germany came to life.

Joe Hart had been enjoying a quiet night on his first appearance since Manchester City's 2-1 loss at Chelsea last month, but in the 38th minute he showed sharp reflexes to keep out a header from Mertesacker and then block Kruse's follow-up.

Respite was brief though, as within seconds Mertesacker leapt to meet Toni Kroos's cross from the right and directed a towering header inside the England goalkeeper's right-hand post from 15 yards out.

Gerrard threatened to reply immediately by firing a long-range shot narrowly over the bar, while Townsend went even closer in the 57th minute, hitting the base of the post with a swerving drive from 25 yards.

Loew's men remained a menace on the break, however, with Hart standing up well to save from Marco Reus and then plunging to his right to thwart Mario Gotze, before substitute Sidney Sam lobbed over.

England's best late chance fell to Chris Smalling, who saw a header deflected over, before the final whistle brought with it the all too familiar sight -- for English eyes -- of German celebrations.