Borussia Dortmund on Thursday announced they had signed Nuremberg midfielder Ilkay Guendogan on a four-year contract as the German champions begin building their squad for next season. 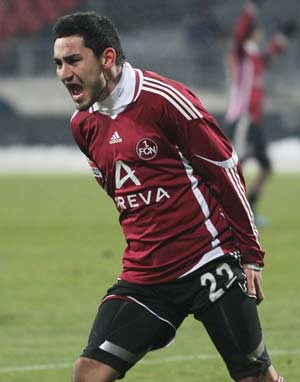 Borussia Dortmund on Thursday announced they had signed Nuremberg midfielder Ilkay Guendogan on a four-year contract as the German champions begin building their squad for next season.

The Germany under-21 star, who will join Dortmund next season, is reported to have cost the Bundesliga winners four million euros (5.8m US dollars).

"We have agreed in principle to a four-year contract," said Dortmund's director of sport Michael Zorc.

The 20-year-old Guendogan, who was born in Gelsenkirchen, the home of Dortmund's arch-rivals Schalke, has scored five goals in 24 Bundesliga games for Nuremberg this season.

"Ilkay is a fast and well-rounded player, he will fit perfectly into our style of football", said Dortmund coach Jurgen Klopp.

Guendogan is considered a good replacement for Turkey international Nuri Sahin, who is set to join Real Madrid from Borussia Dortmund, according to reports in the Spanish media.

A deal to transfer the 22-year-old midfielder "is well underway," the daily Marca said on Thursday.

Comments
Topics mentioned in this article
Football VfB Stuttgart Borussia Dortmund Bayern Munchen Arjen Robben Franck Ribery Ilkay Gundogan
Get the latest updates on IPL 2020, check out the IPL Schedule for 2020 and Indian Premier League (IPL) Cricket live score . Like us on Facebook or follow us on Twitter for more sports updates. You can also download the NDTV Cricket app for Android or iOS.