France manager Didier Deschamps thanked "all the English people" and said that he had found the pre-match rendition of 'La Marseillaise' particularly moving. 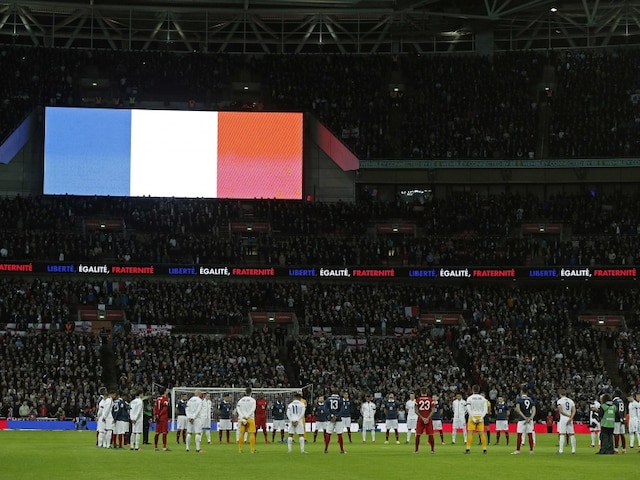 France manager Didier Deschamps and captain Hugo Lloris paid tribute to England's supporters for the respect they showed their grieving side during Tuesday's poignant friendly at Wembley.

Taking place four days after the attacks in Paris that left 129 people dead and over 350 injured, the match, which England won 2-0, was preceded by a stirring rendition of the French national anthem and an impeccably observed minute's silence. (Wembley Honours Paris Victims With French Anthem)

Goalkeeper Lloris, who plays for London club Tottenham Hotspur, told ITV Sport: "First of all we want to thank all the England people in the stadium for their respect.

"The performance was not there for us and we had a lack of aggressiveness and concentration. It was more about solidarity. Life is still going on, so we need to carry on."

Deschamps thanked "all the English people" and said that he had found the pre-match rendition of 'La Marseillaise' particularly moving.

"Emotionally, it was a very, very strong moment," he said.

"We were all united in this moment of communion, which obviously lifts the spirits because you feel it in your heart. It's beautiful, it's moving, it's grandiose. It's very strong." (Germany-Netherlands Match Called-Off for 'Security Reasons': Police)

France's Lassana Diarra, whose cousin was killed in the attacks, was granted a warm reception when he came on as a second-half substitute, while Antoine Griezmann, whose sister escaped unhurt from the massacre at the Bataclan theatre that left 89 dead, also made an appearance.

On his decision to send Marseille midfielder Diarra on, Deschamps said: "I spoke to him at length. He didn't ask me for anything special. He was available if I needed him.

"I chose to send him on because after what he experienced, it was to send him a sign. He sent us a remarkable message. His presence with us was something very, very strong. That's why I let him play the last few minutes."

Hodgson said that he had been aware of the security alert that had caused Tuesday's friendly between Germany and the Netherlands in Hanover to be cancelled, but said: "We had faith in the security measures being put in place here."

Responding in French to a question from a French journalist, the 68-year-old added: "The most emotional moment for me was when we read the words of the Marseillaise on the screen and saw the French team sing with such fervour.

"It's really difficult to express our sentiments because it's something that has really affected the French people. The only thing we could do was show our solidarity and all the sympathy possible.

"But it's France that has to live through these horrible moments. We can't do more than that."

Rooney, who has now scored 51 goals for his country, said: "It was always going to be a difficult night for everyone, especially the French players and staff. The fans were brilliant.

"This will be shown round the world and will show unity. Football is a global game and, as Didier Deschamps said yesterday, it is not about religion or race. We need to stand tall together in these tough times."

Comments
Topics mentioned in this article
Hugo Lloris France England Football
Get the latest Cricket news, check out the India cricket schedule, Cricket live score . Like us on Facebook or follow us on Twitter for more sports updates. You can also download the NDTV Cricket app for Android or iOS.