Son Heung-Min put Tottenham ahead and Alli increased their advantage as they won at the Emirates Stadium for the first time in 10 visits. 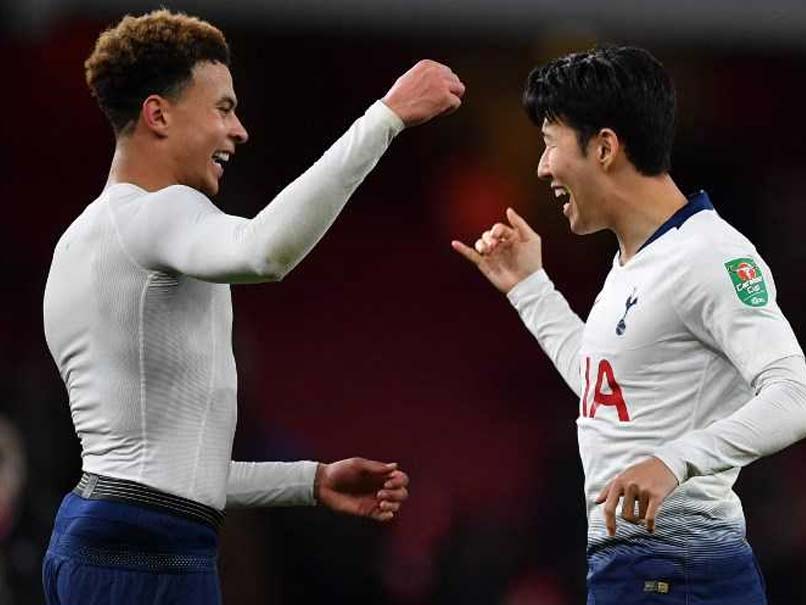 Mauricio Pochettino has yet to win a major trophy in his four-year reign at Tottenham Hotspur.© AFP

Mauricio Pochettino called for Arsenal to take "responsibility" after Tottenham star Dele Alli was hit by a bottle thrown from the crowd during his side's 2-0 League Cup quarter-final win on Wednesday. South Korea forward Son Heung-Min put Tottenham ahead and Alli increased their advantage as they won at the Emirates Stadium for the first time in 10 visits dating back to 2010. The England midfielder's decisive contribution provoked a disgraceful reaction from an Arsenal fan, who threw a plastic bottle that struck Alli on the back of the head in the 73rd minute.

Alli rubbed his head but appeared unharmed as he responded by gesturing towards the Arsenal fans to indicate the scoreline.

"It is what it is. It made the goal even sweeter, and the win," Alli said with a smile.

But Tottenham manager Pochettino wasn't so sanguine about the missile throwing and demanded Arsenal find the "stupid person".

"Yes I saw. When we play a derby we hate each other in a good way, but that looks in a bad way when you want to damage some people," he said.

"One stupid person made a mistake. I respect the Arsenal fans. I hope that Arsenal take some responsibility.

"Through the camera you can identify. It wasn't a problem but it could be a big issue. I think they will identify the people."

There also appeared to be other objects thrown by Arsenal supporters into the section occupied by Tottenham's fans as the atmosphere turned toxic.

The shocking incidents came after a Tottenham fan was banned for four years after being found guilty of throwing a banana skin at Arsenal's Pierre-Emerick Aubameyangwhen the teams met in an acrimonious clash earlier this month.

It continued a worrying trend of fan behaviour after the recent alleged racist abuse of Manchester City's Raheem Sterling by a Chelsea supporter.

Arsenal are scanning CCTV to find the culprit and Gunners boss Unai Emery condemned the incident, saying: "If there is one situation like this, it is not good behaviour."

The unsavoury issues in the stands took the gloss off a mature Tottenham performance that underlined why Pochettino has been installed as the bookmakers' favourite to succeed the sacked Jose Mourinho as Manchester United's next permanent manager.

Pochettino has yet to win a major trophy in his four-year reign at Tottenham, or in his previous jobs at Espanyol and Southampton.

But if the 46-year-old does take charge of United at the end of the season, once Ole Gunnar Solskjaer finishes his spell as interim boss, he remains in with a chance of leaving with silverware back in the Tottenham trophy cabinet.

Tottenham have not won a major prize since lifting the League Cup in 2008 and they will face London rivals Chelsea over two legs for a place in the final.

Eden Hazard came off the bench to score Chelsea's 84th-minute winner in their 1-0 victory against Bournemouth at Stamford Bridge.

"Chelsea is a great team and it's going to be very tough but we are excited," Pochettino said.

In the other semi-final, holders Manchester City take on third-tier Burton.

Against the run of play, Tottenham gave a thrilling glimpse of their class as they snatched the lead with a lethal counter-attack in the 21st minute.

When Lucas Moura's aerial challenge deflected the ball into Alli's path, the Tottenham midfielder instinctively clipped a superb pass over the Arsenal defence.

Son anticipated the delivery with a perfectly-timed run behind the flat-footed Nacho Monreal and kept his nerve to slot a fine finish past Petr Cech.

Aaron Ramsey was inches away from equalising when he met Alex Iwobi's cross with a volley that cannoned back off a post.

Arsenal's profligacy proved costly as Pochettino's men turned up the heat after half-time.

Pochettino went for the kill as he sent on Harry Kane for his first appearance in the tournament since 2015.

It was an inspired move as Kane played a key role in Tottenham's second goal in the 59th minute.

When Cech miskicked a clearance straight to Kane, the Tottenham striker floated a superb pass to Alli, who beat the offside trap before clipping a majestic finish over the Arsenal keeper.

Just 17 days after Arsenal's 4-2 Premier League win against Pochettino's team, this was a welcome early Christmas present for Tottenham.