Barcelona says Villa will not be fit to play at Granada on Saturday in the Spanish league. 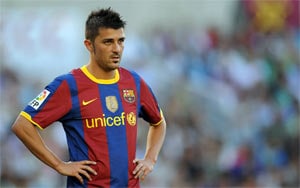 Barcelona says striker David Villa has been released from his second hospital stay this week to treat a case of kidney stones.

Villa spent Monday night in hospital before being sent home, only to return due to intense pain on Thursday for further medical care.

Barcelona says Villa will not be fit to play at Granada on Saturday in the Spanish league.

The 31-year-old Villa missed several games this year due to a muscle injury, and has yet to recover his starting role since returning from a long layoff because of a broken leg last summer.

Comments
Topics mentioned in this article
Football Real Madrid Barcelona David Villa
Get the latest Cricket news, check out the India cricket schedule, Cricket live score . Like us on Facebook or follow us on Twitter for more sports updates. You can also download the NDTV Cricket app for Android or iOS.