After spending more than 250 million euros ($329 million) on players by its cash-rich Qatari owners, PSG's long wait to be crowned French league champions was over. 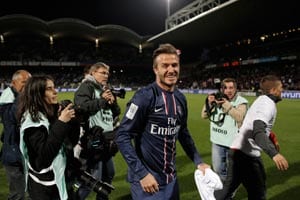 David Beckham and Zlatan Ibrahimovic kept possession in the corner of the pitch, playing down the clock as they closed in on winning the league title in a fourth different country. For Paris Saint-Germain, it was to be its first in 19 years.

After spending more than 250 million euros ($329 million) on players by its cash-rich Qatari owners, PSG's long wait to be crowned French league champions was over. A 1-0 win at Lyon courtesy of Jeremy Menez's second-half goal ensured the trophy was secured with two rounds remaining.

For Beckham and Ibrahimovic, two of football's biggest names, it was just the latest triumph in careers long used to success.

Beckham now has 10 league winners' medals from his time at PSG, Manchester United, Real Madrid and the Los Angeles Galaxy. Ibrahimovic has won championships at five clubs - PSG, AC Milan, Inter Milan, Barcelona and Ajax - and there were two with Juventus that were later revoked because of the 2006 match-fixing scandal.

It was a third league title for PSG coach Carlo Ancelotti after winning with Milan and Chelsea, but it was his future rather than the past that has dominated speculation. The Italian has been linked with a move away, but he gave away nothing Sunday.

"I haven't talked (about the future), there is still time," Ancelotti said. "We're going to finish the season well and respect the league by giving it our all until the end.

"In any case, it's a title which has the same place in my heart as the others I've won. They are all really good souvenirs. I am very happy."

His players were happier to reveal their desires.

PSG had long been on course for its first league title since 1994 but failed to close it out in recent weeks. However, Menez's goal in the 53rd minute took the club seven points ahead of Marseille, which is now guaranteed second spot after third-place Lyon's defeat.

The final whistle sparked scenes of jubilation at the Stade de Gerland and in Paris, where hundreds of fans began gathering on the Champs-Elysees.

"It's been difficult in a league with a lot of intensity and speed," Ancelotti said. "But the team has been solid and compact since December. We've fulfilled the objective of winning Ligue 1 and going far in the Champions League. The team has worked well. They have been very professional."

PSG, under owner Qatar Investment Authority, has spent freely during the past two years on players, including Ibrahimovic, Brazil defender Thiago Silva, Argentina midfielder Javier Pastore and 19-year-old midfielder Lucas, one of the most sought-after young players in Brazil.

The owners bought a 70 percent stake to take control of the club in June 2011 at an estimated cost of 40 to 50 million euros, including the debt and losses incurred over that season. The remaining 30 percent was bought from Colony Capital the following year with the transaction valuing the club at 100 million euros.

Earlier, Nice lost 4-0 at relegation-threatened Evian as a stunning goal from Saber Khelifa helped dent the visitors' chances of qualifying for next season's Champions League.

Saint-Etienne's hopes of joining Europe's elite next season also diminished as it lost 3-1 at Lorient.

Evian moved two points clear of the relegation zone with the victory, which was marked by Khelifa's spectacular second goal - a lob from more than 50 meters. Khelifa had all but sealed the match with his first in the 56th minute, following goals from Kevin Berigaud and Mohammed Rabiu.

Nice remained fifth in the standings, three points behind Lyon. It is also in danger of missing out on the Europa League although it is level on points with Lille.

Saint-Etienne is four points behind Lyon, but has already qualified for the Europa League after winning the League Cup.

Kevin Monnet-Paquet and Fabien Robert headed Lorient into a comfortable lead but Kurt Zouma reduced the deficit 10 minutes from time.

Saint-Etienne thought it had leveled shortly afterwards but Pierre-Emerick Aubameyang's effort was flagged offside and Yann Jouffre sealed the result in stoppage time.

Comments
Topics mentioned in this article
Football Marseille Paris SG Zlatan Ibrahimovic
Get the latest updates on ICC T20 Worldcup 2022 and CWG 2022 check out the Schedule, Live Score and Medals Tally. Like us on Facebook or follow us on Twitter for more sports updates. You can also download the NDTV Cricket app for Android or iOS.