Daniele De Rossi found the target in the 59th minute as AS Roma recorded a 3-1 win over Empoli. 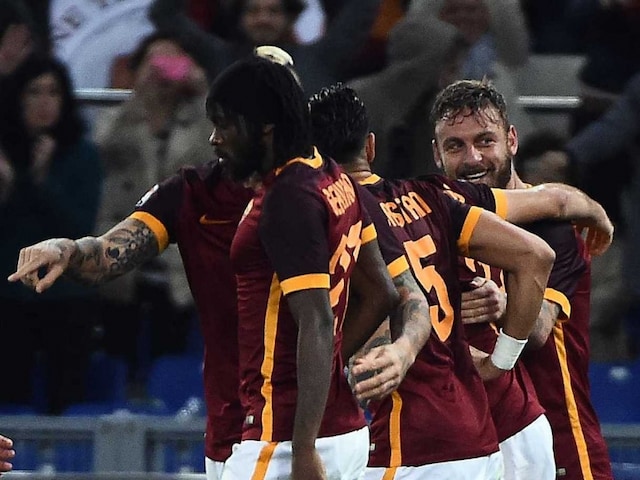 Daniele De Rossi marked his 500th appearance for Roma with a goal in his team's 3-1 win over Empoli on Saturday as Rudi Garcia's side moved into second place in Serie A. (Click here for latest Football stories)

The 32-year-old De Rossi found the target in the 59th minute after Miralem Pjanic had hit the opener with a superb direct free-kick three minutes earlier.

The Bosnian also played a key role in De Rossi's goal when his corner was headed home by the midfield veteran.

Roma, playing without the injured Francesco Totti and Edin Dzeko, were 3-0 to the good in the 69th minute when Mohamed Salah found the net after being set up by Gervinho.

Empoli pulled a goal back through Austrian international Marcel Buechel in the 70th minute but the three points for Roma will be a huge boost ahead of their Champions League clash at Bayer Leverkusen on Tuesday.

The win took Roma into second spot in the table, one point behind leaders Fiorentina.

"When you win it's always a perfect night, and I'm even happier I scored a goal especially when I don't score that often," said De Rossi, whose only regret was scoring under an empty 'Curva Sud'.

A large section of the club's hardline fans, who traditionally occupy the more colourful and lively 'Curva Sud' end of the Olimpico, have gone on strike to protest police restrictions in and around the stadium.

It has left the Curva conspicuously empty, and De Rossi added: "Tonight the goal under an empty Curva was a disappointment. We hope the situation can be resolved, it would have been the perfect present to mark 500 appearances."

De Rossi added: "It's an important win for us because Empoli are a tough side, they're well organised and solid in midfield. Everyone struggles against them."

Elsewhere, AC Milan put the brakes on Torino's promising start to the campaign by holding on for a 1-1 draw at the Stadio Olimpico in Turin.

Torino hosted AC Milan and were expected to claim their first win over the Rossoneri since 2001.

But despite Carlos Bacca putting the visitors ahead in the 63rd minute, Daniele Baselli pounced to level 10 minutes later for Torino.

It was Italy under-21 star Baselli's fourth goal of the campaign, but he said: "I'm happy for the goal but not for the fact we didn't win this match.

"We're a side that never gives up. It's a shame for the result."

While it left Torino among the top five, four points behind leaders Fiorentina, Milan slipped to ninth place.

Rossoneri coach Sinisa Mihajlovic claims he has the full support of club owner Silvio Berlusconi, with whom he has held crisis talks of late.

After their third consecutuve defeat, he said no one is hurting more than the club itself.

"I'm disappointed because after we scored, we stopped playing. It's like we'd lost our composure.

"It was only after Baselli's equaliser that we started playing again.

"We're the first ones to feel disappointed. But we just have to keep on working hard and trying to get better game by game. There's still a long way to go in this championship."

On Sunday, Inter Milan face champions Juventus looking to claim their first San Siro win in the 'Derby d'Italia' -- one of the league's biggest fixtures -- for the first time since 2010.

An Inter win would see Juventus slip 11 points behind the Nerazzurri and could see Inter, if leaders Fiorentina lose at Napoli, go back on top of the league.

Comments
Topics mentioned in this article
Daniele De Rossi Roma Football
Get the latest Cricket news, check out the India cricket schedule, Cricket live score . Like us on Facebook or follow us on Twitter for more sports updates. You can also download the NDTV Cricket app for Android or iOS.