Cristiano Ronaldo scored from a direct free kick in the 50th minute and followed it up by converting a penalty kick. 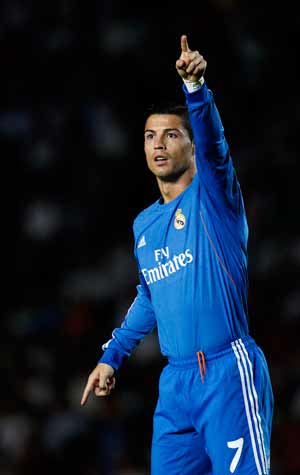 Cristiano Ronaldo scored twice in the second half to give Real Madrid a hard-fought 2-1 away win at Elche in the Spanish league Wednesday.

In a lackluster, strategic match, Elche defender Eduardo Albacar struck a free kick that David Lomban back-headed toward goal, forcing an athletic save from goalkeeper Diego Lopez in the 10th minute.

Ronaldo scored from a direct free kick in the 50th minute which bounced just in front of goalkeeper Manuel Herrera, who got a touch but was unable to deflect the ball.

"It was a very difficult match in which our opponents played very well and caused us some problems, and there was that goal near the end that we shouldn't have conceded," said Lopez.

Ghanaian striker Richmond Boakye who is on loan to Elche from Juventus, headed a perfectly-aimed shot into goal from an Albacar cross in injury time.

Madrid was then awarded a much-argued penalty one minute later as defender Pepe wrestled with Elche midfielder Carlos Sanchez in the penalty area during a free kick.

Ronaldo stepped up to convert the shot, six minutes into injury time.

"We have to be realists, but they have scored two goals against us from two actions that from my point of view should not have gone against us," said Albacar. "I end up with the sensation that they have robbed us. From having got a draw against a very good team, I go away feeling we've been mugged."

Madrid coach Carlo Ancelotti said that as a general rule he did not like talking about referee's decisions. "It's difficult to comment because my position from the bench is not so good, but I spoke to Pepe and he told me the penalty was clear."

Adrian Gonzalez pulled one back for Rayo in the 55th

Rayo lost defender Alejandro Galvez in the 65th minute on a second yellow card offense and forward Jonathan Viera in the 81st on a straight red card.

Barcelona leads the standings with Atletico Madrid second-place, also on 18 points after six matches, but on a worse goal differential. Real Madrid is third on 16 with Valencia seventh on nine, while Granada is 14th on five, Elche is 18th on three and Rayo is bottom, also on three.

Comments
Topics mentioned in this article
Football Real Madrid Elche Cristiano Ronaldo
Get the latest updates on India vs South Africa and check out  Schedule, Results and Live Score. Like us on Facebook or follow us on Twitter for more sports updates. You can also download the NDTV Cricket app for Android or iOS.