Maurizio Sarri complimented Cristiano Ronaldo's mother as the Portuguese star extended his scoring streak in a 3-1 win over Roma to advance to the Italian Cup semi-finals. 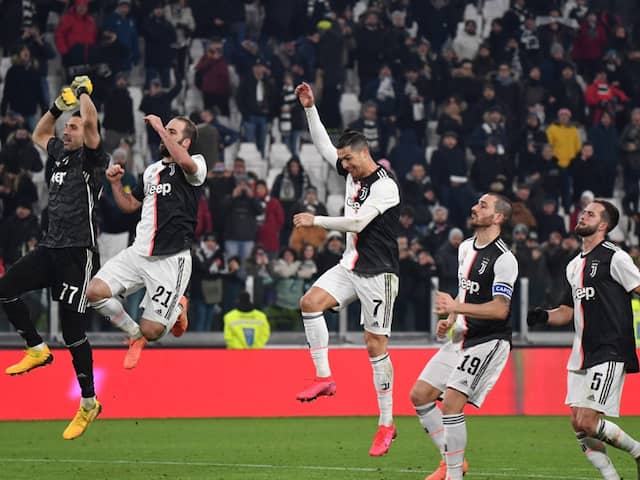 Juventus coach Maurizio Sarri complimented Cristiano Ronaldo's mother as the Portuguese star extended his scoring streak in a 3-1 win over Roma to advance to the Italian Cup semi-finals on Wednesday. The Portuguese star picked up a Gonzalo Higuain cross after 26 minutes, finishing off from an angle in the Allianz Stadium. It was the 34-year-old's 12th goal in eight consecutive games in which he has played in all competitions for the Turin giants but his first in the Italian Cup. The five-time Ballon d'Or winner has also scored seven goals in four matches played in 2020.

"I believe that the compliments should be made to his mother," said Sarri of Ronaldo who has now scored in 15 different club competitions throughout his career.

"He is in super form physically. In terms of explosiveness he is doing well, he takes great care of the details.

"It is difficult to improve on an individual level. We are talking about one of the greatest of all time and I would like to help him win a sixth Ballon d'Or.

Rodrigo Bentancur added a second goal after 38 minutes with defender Leonardo Bonucci nodding in a third just before the break.

Cengiz Under pulled a goal back for Roma five minutes after the break, rifling in from a distance with the ball hitting the crossbar and bouncing in off goalkeeper Gianluigi Buffon in the Juventus goal.

Buffon denied Alessandro Florenzi and Aleksandar Kolorav to keep Juventus on course in the competition they have won 13 times but exited in the quarter-finals last season to Atalanta.

Brazilian Danilo limped off before the break to be replaced by Juan Cuadrado, leaving Sarri with an injury worry ahead of this weekend's trip to Napoli.

Roma, fourth in the league, were struggling with injuries while Edin Dzeko was sitting out a ban, but their form was worrying just four days before their derby clash against city rivals Lazio.

"The difference in the first half was efficiency," said Roma coach Paulo Fonseca.

"The first chance they had, they scored. The same for the second.

"We know that Edin Dzeko is a very important player for us and his ban was damaging, but the forwards could have done much better this evening."

Juventus -- who lost the Italian SuperCup last month to Lazio -- will play either AC Milan or Torino in the semi-finals.

Holders Lazio were eliminated in the quarter-finals on Tuesday with a 1-0 loss to Napoli.

Italy international Lorenzo Insigne needed just 99 seconds to score the goal that won a match in which both teams had a player sent off and Serie A top scorer Ciro Immobile missed a penalty in the first 25 minutes.

The final will be played on May 13 in Rome.