After losing to Argentina 4-0 in the semifinals, the 31st-ranked United States was beaten by World No.3 Colombia for the second time in the 16-nation tournament. 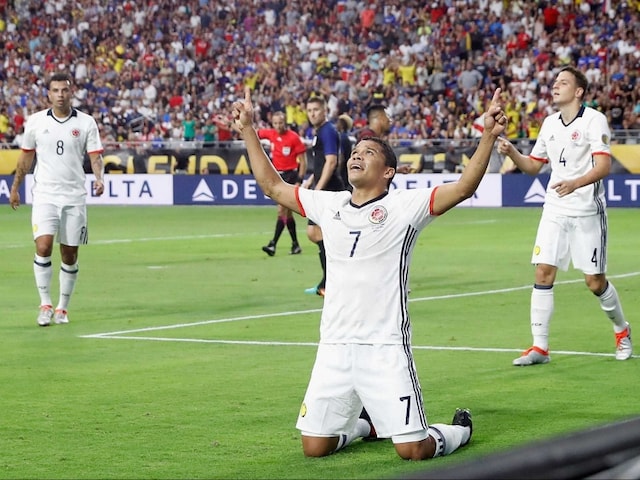 Carlos Bacca of Colombia celebrates his first half goal against the United States during the 2016 Copa America Centenario third place match at University of Phoenix Stadium in Glendale.© AFP

Carlos Bacca beat goalkeeper Tim Howard by sliding to poke in a headed cross in the 31st minute, and the United States finished fourth in the Copa America with a 1-0 defeat against Colombia on Saturday night.

After losing to Argentina 4-0 in the semifinals, the 31st-ranked U.S. was beaten by No. 3 Colombia for the second time in the 16-nation tournament.

Bobby Wood came closest to scoring for the U.S. when he hit a post in the 62nd, one minute after Colombia's Juan Cuadrado hit the underside of the crossbar.

The U.S. matched its previous best finish in the tournament, when it lost to Colombia in the 1995 fourth-place game at Uruguay.

After the Americans lost to Jamaica in the semifinals of last year's CONCACAF Gold Cup and struggled in the semifinal round of qualifying for the 2018 World Cup, U.S. coach Jurgen Klinsmann was hoping his team would rebound in the Copa, when right back DeAndre Yedlin, central defender John Brooks, midfielder Gyasi Zardes and forward Bobby Wood solidified their positions as regular starters.

Darlington Nagbe and 17-year-old Christian Pulisic again entered as second-half subs, two more players who could break through and replace veterans during the remaining 16 months of World Cup qualifying.

Colombia, which never has won the Copa America, finished third for fourth time but first since 1995. Argentina plays Chile for the title on Sunday night in East Rutherford, New Jersey.

Both teams finished a man short, when American defender Michael Orozco and Colombian defender Santiago Arias were ejected for a confrontation in the third minute of second-half stoppage time. Orozco is suspended the U.S.'s World Cup qualifier at St. Vincent and the Grenadines on Sept. 2, and Arias for Colombia's qualifier against Venezuela.

Klinsmann inserted the 37-year-old Howard into his lineup in place of Brad Guzan, who had started the previous nine games. Matt Besler was in central defense instead of Brooks, who was bothered by knee inflammation, and Orozco was at left back because Fabian Johnson has a sore groin.

Midfielders Jermaine Jones and Alejandro Bedoya returned to the lineup along with Wood after the three served one-game suspensions.

Colombia scored after Juan Cuadrado, from along a flank, cut the ball back to James Rodriguez, just outside the penalty area. Arias made a run to get by Bedoya, and Rodriguez lofted a pass to Arias, who jumped at the edge of the 6-yard box and headed the ball across Howard's goal to Bacca. The forward slid ahead of Yedlin to nudge the ball in for his 13th international goal, his second of the tournament.

Clint Dempsey, who led the U.S. with three goals in the tournament, nearly scored on a free kick in the 51st minute. Colombia goalkeeper David Ospina dived left and lifted his right arm to tip Dempsey's effort wide.

Comments
Topics mentioned in this article
Colombia United States James Rodriguez Carlos Bacca Football
Get the latest Cricket news, check out the India cricket schedule, Cricket live score . Like us on Facebook or follow us on Twitter for more sports updates. You can also download the NDTV Cricket app for Android or iOS.