Tottenham striker Dempsey netted his 34th and 35th international goals in his 96th appearance for the USA, moving past Eric Wynalda into second on the all-time US scoring list, 14 shy of Landon Donovan's record. 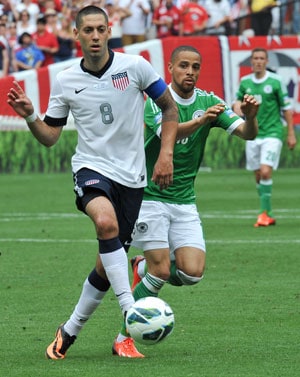 US captain Clint Dempsey scored two goals in the second half and the Americans held off a late comeback on Sunday for a 4-3 victory over second-ranked Germany in an international football friendly.

Tottenham striker Dempsey netted his 34th and 35th international goals in his 96th appearance for the USA, moving past Eric Wynalda into second on the all-time US scoring list, 14 shy of Landon Donovan's record.

"Having a player like Clint Dempsey on your team is just a privlege," said US coach Jurgen Klinsmann.

"This is one of the best players in US history. He has the hunger and the drive. He sends a message to his own players and also to the opponents."

Former German star Klinsmann guided the Americans against a German side he managed in the 2006 World Cup, a team now guided by his former assistant, Joachim Loew.

Dempsey's brace gave the Americans a dream 4-1 lead in the US Soccer Federation's centennial celebration match just four days after they struggled in a 4-2 loss to Belgium.

"The game with Belgium was simply too embarassing to them," Loew said. "The US team approached the game with passion and commitment. I was not surprised with the quality of the US team."

A German side missing many of its top stars battled back on late goals by Max Kruse and Julain Draxler, but could not net the equalizer, falling to 6-3 against the Americans, their first loss to a US side since falling 2-0 at the 1999 Confederations Cup in Mexico.

German substitute Heiko Westermann's header in the 51st minute off a corner kick from Kruse pulled the visitors within 2-1.

But the Americans answered in the 60th minute, Jozy Altidore playing the ball to his right into the penalty area and Dempsey taking it on one bounce and hammering a shot into the back of the net.

Dempsey struck again four minutes later, firing a left-footed rocket from just beyond the penalty area for a 4-1 US lead.

Kruse pulled one back for the Germans in the 79th minute and Draxler trimmed the margin to 4-3 in the 81st, taking the rebound off a Sydney Sam shot that US goalkeeper Tim Howard sprawled to deflect and tapping the ball unchallenged into the goal.

But the US stiffened at the finish to preserve the victory.

"We still have to hold ourselves to a higher standard and not allow those two late goals," Dempsey said.

"We're not happy with the number of goals we have allowed in the last two games. At the same time, we take a lot of confidence from beating a very good team."

German defender Per Mertesacker missed a golden chance from the heart of the penalty area in the 10th minute while one-on-one with Howard, pushing his shot just wide of the goal to the right of the Everton netminder.

Altidore gave the Americans the lead in the 13th minute, blasting a cross from Graham Zuzi with a left-footed volley into the back of the net from just inside the penalty area.

A 16th-minute blunder by German goalkeeper Marc-Andre ter Stegen gave the US side a 2-0 edge. Ter Stegen misplayed a pass from defender Benedikt Howedes and the ball rolled off his foot and across the goal line.

In the 24th minute, German captain Miroslav Klose took a breakaway pass and flicked a right-footed shot past a helpless Howard, but the Lazio striker was offside on the play, nullifying the effort as Germany trailed 2-0 at half-time.

Comments
Topics mentioned in this article
Football FIFA Bayern Munchen Arsenal Stoke City Lionel Messi Clint Dempsey Mesut Özil Per Mertesacker Miroslav Klose Yossi Benayoun Xabi Alonso
Get the latest updates on IPL 2020, check out the IPL Schedule for 2020 and Indian Premier League (IPL) Cricket live score . Like us on Facebook or follow us on Twitter for more sports updates. You can also download the NDTV Cricket app for Android or iOS.