Wales manager Chris Coleman will hold talks with captain Aaron Ramsey before deciding whether to call-up Stoke defender Ryan Shawcross, who was responsible for the tackle that left the Arsenal star with a badly broken leg. 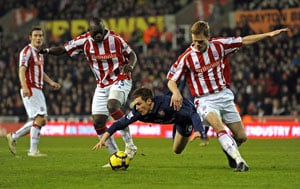 Wales manager Chris Coleman will hold talks with captain Aaron Ramsey before deciding whether to call-up Stoke defender Ryan Shawcross, who was responsible for the tackle that left the Arsenal star with a badly broken leg.

Gunners midfielder Ramsey had his leg shattered in six places in 2010 after a tackle by Shawcross and refused to accept the centre-half's attempts to apologise.

Arsenal manager Arsene Wenger described the Shawcross challenge as "horrendous and unacceptable" and there has been significant tension between the clubs since then.

But Coleman is keen to bring Shawcross into his squad as the 24-year-old English-born player qualifies for Wales because he spent five years of compulsory education in the principality.

Shawcross, who began his career in Manchester United's youth academy, rejected a previous approach to play for Wales.

But Coleman is convinced he can change his mind and he will open talks once he hears that Ramsey is willing to make peace with his rival.

"Ryan is a good player who could strengthen us," Coleman told The Sun.

"I will have a conversation with Aaron because he's somebody I respect a great deal, he's our captain and an important player.

"I won't shy away from it because there are issues."

Coleman also wants to recruit Swansea's Spanish-born defender Angel Rangel and Cardiff defender Ben Turner, who qualifies through Welsh grandparents, as he prepares for the start of the 2014 World Cup qualifiers in September.

Comments
Topics mentioned in this article
Ryan Shawcross Mark Schwarzer Tim Cahill Football Arsenal Stoke City
Get the latest updates on Fifa Worldcup 2022 and check out  Fifa World Cup Schedule, Stats and Live Cricket Score. Like us on Facebook or follow us on Twitter for more sports updates. You can also download the NDTV Cricket app for Android or iOS.