Manchester United was held to a 1-1 draw at Shakhtar Donetsk, while City's former coach Roberto Mancini steered Galatasaray to a 2-2 draw at Juventus, just two days after taking charge of the Turkish side. 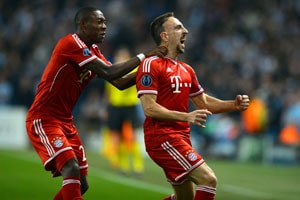 Bayern Munich and Real Madrid produced dominant performances in the Champions League on Wednesday as the likes of Arjen Robben and Cristiano Ronaldo found the net on a good night for Europe's top forwards.

Robben helped Bayern outclass Manchester City 3-1 away, a demonstration that Bayern's defense of the title is right on track with two wins from two games.

"We controlled the match and that is important in the Champions League," Bayern's coach Pep Guardiola said.

Ronaldo and Angel Di Maria scored two goals each for Real Madrid in a 4-0 rout of Copenhagen, while Zlatan Ibrahimovic notched a brace for Paris Saint-Germain in a 3-0 demolition of Benfica.

They were all outdone by Kostas Mitroglou, who scored a hat trick to lead Olympiakos to a 3-0 victory at Anderlecht.

Manchester United was held to a 1-1 draw at Shakhtar Donetsk, while City's former coach Roberto Mancini steered Galatasaray to a 2-2 draw at Juventus, just two days after taking charge of the Turkish side. 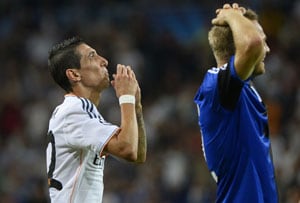 Ronaldo's two goals against Copenhagen raised his total for two games to five - following a hat trick in a 6-1 win at Galatasaray on the opening matchday.

Madrid coach Carlo Ancelotti said he was pleased with the game, saying it had a good beginning, intensity and balance. "We tried to carry on scoring right into the last minutes, there was a good attitude in the team."

Copenhagen coach Stale Solbakken praised Ronaldo, saying: "He is the man of the match with his two goals."

With 10 goals in two matches and six points Real is firmly in control of Group B, ahead of Juventus with two points.

Juventus nearly picked up all three points on the night when substitute Fabio Quagliarella made it 2-1 with an 87th minute header - only for Didier Drogba, who had earlier put the Turkish side in front, to find Umut Bulut for an immediate equalizer.

Bayern also has a perfect record at the top of Group D, while CSKA Moscow pulled level with City on three points with a 3-2 victory over Viktoria Plzen, with Zoran Tosic scoring one goal and setting up another.

Bayern took a 1-0 halftime lead after City goalkeeper Joe Hart let Franck Ribery's shot slip through his grasp in the seventh minute, before Thomas Mueller and Arjen Robben piled on the misery with goals in a four-minute span just before the hour. 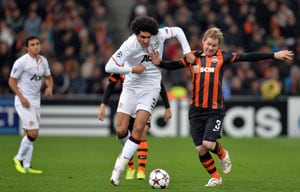 On a sobering night for City, substitute Alvaro Negredo grabbed a 79th-minute consolation before Bayern had defender Jerome Boateng sent off for a professional foul on Yaya Toure with four minutes left.

United stayed true to its stuttering start in its first season after Alex Ferguson by conceding a late equalizer in Donetsk.

Danny Welbeck gave United the lead in the 18th as he slid in between two players to finish off Marouane Felliani's low cross, but Shakhtar leveled in the 76th from Taison's volley after Nemanja Vidic failed to clear a cross.

Both teams have four points in Group A.

In the group's other match, Bayer Leverkusen substitute Jens Hegeler scored from a free kick in injury time for a 2-1 victory over Real Sociedad.

Paris Saint-Germain also has six points at the top of Group C, with Benfica and Olympiakos both on three points.

"What was good tonight was that we controlled the game from the first to the last minute," PSG coach Laurent Blanc said. "We scored when we were on top and caused them problems throughout."

"The biggest players are raring to go in the Champions League. (Ibrahimovic) has never won it. His performance was very, very good tonight," Blanc said.