Zenit Saint Petersburg are the third team to qualify for the knockout stages after Manchester City and Real Madrid. 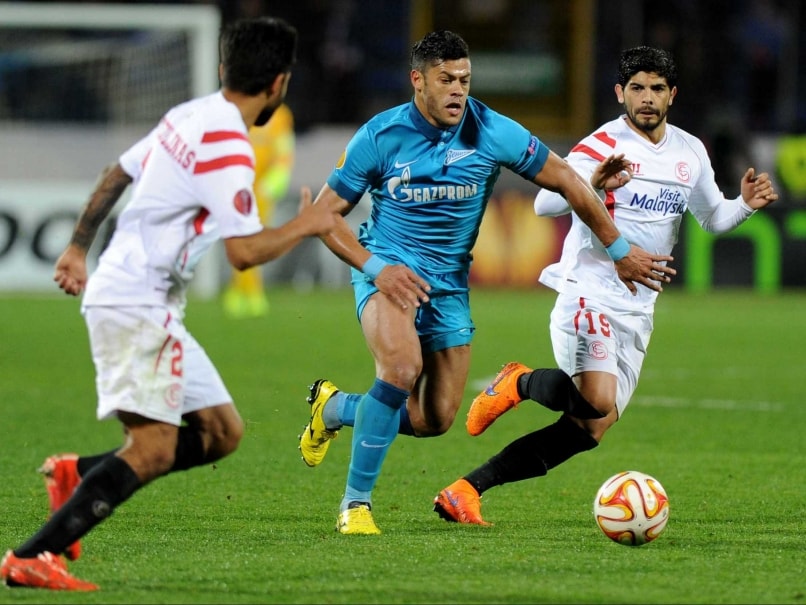 Zenit Saints Petersburg have 12 points, six clear of Valencia, with Gent on four and Lyon footing the table.© AFP
Lyon:

The Russian forward's goals either side of the break at the Stade Gerland maintained Zenit's charmed path through Group H in a lively encounter which ended with both teams down a man.

Zenit are the third team to qualify for the knockout stages after Manchester City and Real Madrid.

"In the end we were more efficient in finishing off moves than Lyon who had 23 shots at our goal."

With two first round games to go, the Russian champions are on 12 points, six clear of Valencia, with Gent on four and Lyon footing the table having harvested just one point.

Andre Villas-Boas' highflyers are the only one of the 16 teams in the competition to boast an unblemished record after four outings.

The former Porto, Chelsea and Tottenham boss welcomed back Hulk after the Brazilian forward sat out weekend domestic Russian action.

And he was at the heart of the move that saw Zenit take a deserved 25th minute lead, shrugging off his two minders down the right to pull the ball across for Dzuyba to slide in with his right foot past Anthony Lopes.

Lyon should have levelled before the break with defender Mapou Yanga-Mbiwa prodding wide with the goal at his mercy and Henri Bedimo's potent shot hitting the woodwork.

Lyon put Zenit under pressure after the restart, fighting for their Champions League lives, but Dzyuba had other ideas as the hour mark approached.

Hulk was once again at the centre of proceedings, bearing down on the Lyon defence before setting up Dzyuba despite a last ditch effort by Corentin Tolisso to save the day.

Lyon did themselves no favours when captain Maxime Gonalons picked up his second yellow card for a foul on his Zenit counterpart, Danny, with 18 minutes left.

Zenit's Aleksandr Anyukov was also sent packing after picking up one booking too many a couple of minutes from time.

Comments
Topics mentioned in this article
Zenit St. Petersburg Football
Get the latest updates on IND vs NZ 2021, check out the Schedule and Live Score . Like us on Facebook or follow us on Twitter for more sports updates. You can also download the NDTV Cricket app for Android or iOS.