Barcelona defender Gerard Pique had let the cat out of the bag over a supposed 33 million-euro ($45 million) move by Cesc Fabregas while chatting with Spain manager Vicente del Bosque at a press conference. 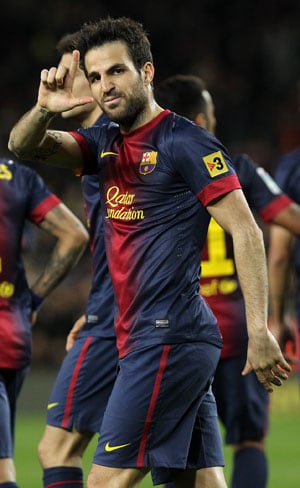 A transfer of Cesc Fabregas from Barcelona to English club Chelsea will be "a pity" for his current club, his Barcelona and Spain teammate Pedro Rodriguez said Thursday.

"I've not talked with Cesc as yet. He's a very good player for us. If he leaves it would be a shame for Barca," Pedro said as Spain prepared for a World Cup warm-up friendly in the US capital against El Salvador on Saturday.

Barcelona defender Gerard Pique had let the cat out of the bag over a supposed 33 million-euro ($45 million) move by Fabregas while chatting with Spain manager Vicente del Bosque at a press conference in Washington.

His remark was picked up by a Spanish public television microphone. No club was mentioned, but Chelsea manager Jose Mourinho has confirmed his side's interest.

It's an unwelcome distraction as Spain prepare for their World Cup title defense, but Pedro said he didn't think any tension would linger between Fabregas and Pique.

"They are calm about it," he said. "It was an awkward situation, I don't know if it will affect them.

Although Pedro thought it would have been better "if the comments hadn't been made," he said Pique and Fabregas had turned their attention to Brazil.

"Now they are dealing with what they need to deal with," he said.

"But Cesc is a great player and has a lot of Premier League experience," he said. "I think great players are always welcome at great clubs."

Fabregas left Barcelona's academy to join English club Arsenal at the age of 16 in 2003 and quickly became the youngest player and goal-scorer in the North London club's history.

He won the FA Cup in 2005 and was named captain in November 2008, but returned to Barcelona three years ago.

"He is a special player with great vision," Azpilicueta said. "And he can play in various positions. At Chelsea we don't have a player with these characteristics."