Cagliari turned on the style to hold Inter Milan to a 2-2 draw at the San Siro on Sunday as Fiorentina hammered 10-man Atalanta 4-1 at home to take over third place from Napoli. 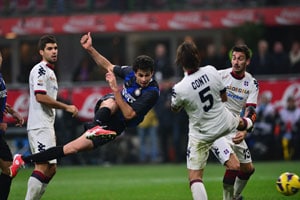 Cagliari turned on the style to hold Inter Milan to a 2-2 draw at the San Siro on Sunday as Fiorentina hammered 10-man Atalanta 4-1 at home to take over third place from Napoli.

After leaders Juventus were held to a scoreless draw at home to Lazio on Saturday Inter had a chance to close the gap on the Serie A champions.

But despite Rodrigo Palacio giving the hosts an early lead, a superb double from striker Marco Sau had the Sardinians in front and it took an own goal from Davide Astori for Inter to pull level.

Inter had several chances to score, notably through Diego Milito, in a lively second half.

But the Argentine striker missed two clear chances from close range and was denied a third time by alert Cagliari 'keeper Michael Agazzi.

In the closing minutes Inter piled on the pressure and were unlucky not to be awarded a penalty when midfielder Walter Gargano was hauled down inside the box.

Cagliari held on and in the end were worthy of a share of the points.

Inter's first draw in 13 matches left them in second place on 28 points, four adrift of Juventus but one ahead of Fiorentina and Napoli, who were held 2-2 at home by AC Milan on Saturday.

Fiorentina maintained their impressive push up the table under coach Vincenzo Montella with a one-sided win over their visitors from Bergamo.

The hosts took a fifth-minute lead when a freekick whipped in from the left evaded the entire Atalanta defence to land at the feet of Gonzalo Rodriguez, who slammed the ball into the net from close range.

Atalanta have been on good form of late and levelled just after the half hour when Giacomo Bonaventura slammed the ball home from close in after it had ricocheted around the Fiorentina area.

But Fiorentina regained the lead before the interval when Alberto Aquilani sent a sublime freekick from the edge of the area past a static Andrea Consigli in the Atalanta goal.

Fiorentina looked to be on their way to a third goal when Juan Cuadrado broke free to run down on goal, only for the Colombian midfielder to be brought down by Luca Cigarini.

Cigarini was red carded for the offence, and Fiorentina made the visitors pay immediately when Aquilani beat Consigli from close range following a corner in first half injury time.

Former Italy striker Luca Toni added a fourth goal with a header four minutes into the second-half to consign Atalanta to their fifth defeat of the season.

Struggling Bologna, meanwhile, beat Palermo 3-0 at home to move a point clear of the relegation zone in a lively match which saw three players red-carded, including the visitors' Albanian goalkeeper Samir Ujkani.

Udinese were held to a 2-2 draw at home by mid-table neighbours Parma, while Siena secured only their fourth win of the campaign with a 1-0 win over Serie A new boys Pescara which moved them off the bottom.

Genoa prop up the table with only nine points from 12 games, but can move out of the relegation places if they beat third from bottom Sampdoria in the Genoa derby later on Sunday.

Comments
Topics mentioned in this article
Football Marco Sau Davide Astori Chievo Juventus Chelsea Juventus Stadium AC Milan Catania Atalanta Fiorentina Lazio Napoli Genoa Manchester United Rodrigo Palacio Inter Milan Cagliari
Get the latest updates on India vs Australia Series, check out the India vs Australia Schedule for 2020-21 and Ind vs Aus live score . Like us on Facebook or follow us on Twitter for more sports updates. You can also download the NDTV Cricket app for Android or iOS.