Bayern twice surrendered the lead in Munich before securing the win against bottom side Paderborn which leaves them four points clear. 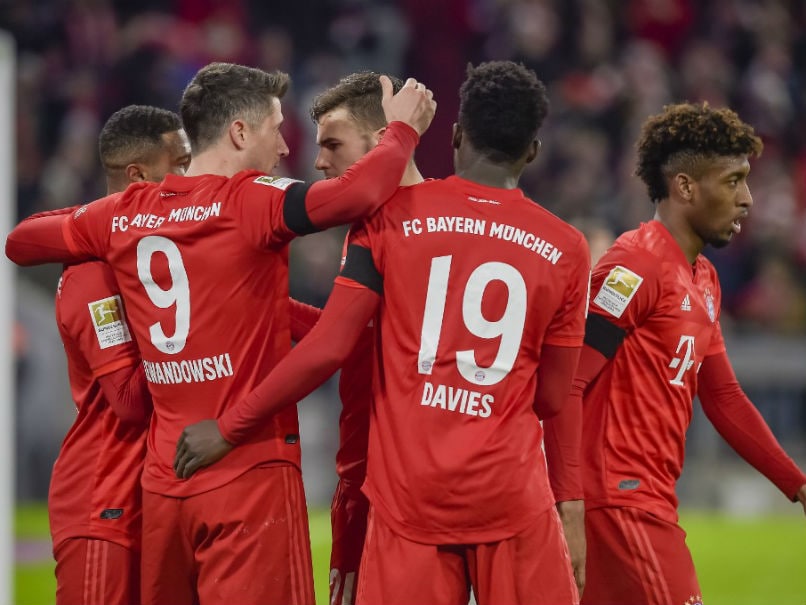 Bundesliga leaders Bayern Munich squeezed past bottom side Paderborn 3-2 on Friday as Robert Lewandowski netted twice to spare goalkeeper Manuel Neuer's blushes in their final game before facing Chelsea in the Champions League. Lewandowski now has a league-leading tally of 25 goals in the top flight, illustrating his importance to the team ahead of Tuesday's last 16, first-leg tie in London. Bayern twice surrendered the lead in Munich before securing the win which leaves them four points clear.

With Bayern Munich leading 1-0 thanks to Serge Gnabry's early goal, Neuer mistimed a clearance outside his area, allowing Paderborn midfielder Dennis Srbeny to fire into an empty net just before half-time.

"I was worried about knocking into him, because that would have been a red card," Neuer explained.

"I had the feeling he would get to the ball before me. That's why it looks that way. It's part of my game and it happens."

However, Lewandowski then struck in the 70th minute to make it 2-1, only for Paderborn to draw level again after poor defending allowed Sven Michel a simple tap in 15 minutes from time.

However, there was still time for Lewandowski to fire home the winner, thanks to Gnabry's superb cross.

In the build-up, Bayern coach Hansi Flick warned his team had to focus on strugglers Paderborn, but the Bavarian giants seemed to have one eye on Chelsea.

"Paderborn absolutely challenged us to the very last," admitted Flick.

Paderborn had the ball in Bayern's net after four minutes when their striker Streli Mamba slid the ball under Neuer, but the effort was flagged offside.

As expected, Bayern took an early at the Allianz Arena when Gnabry celebrated his 100th Bundesliga appearance by turning and hitting into the bottom corner on 26 minutes.

Paderborn drew level after Neuer mistimed a clearance outside the box.

The Germany captain had twice previously cleared the danger by dealing with long-distance chances intended for Paderborn's forwards.

However, the tactic backfired a third time when he failed to clear a ball over the defence meant for Srbeny, who kept his cool and slotted into the empty Bayern net on 44 minutes.

With the scores locked at 1-1 and time ticking down, Lewandowski restored the hosts' lead when Gnabry set him up for a lethal shot on 70 minutes.

Paderborn, however, came back again and Michel gave them a second equaliser by tapping home a rebound after Neuer had saved a shot by replacement left-back Dennis Jastrzembski.

However, it was Gnabry again who provided the assist with an inch-perfect cross which Lewandowski swept home two minutes from time to settle the matter.

Borussia Dortmund Football
Get the latest updates on ICC T20 Worldcup 2022, check out the Schedule and Live Score. Like us on Facebook or follow us on Twitter for more sports updates. You can also download the NDTV Cricket app for Android or iOS.