Hertha registered a convincing 4-0 win over Union in the Berlin derby to move up to 10th place in the Bundesliga table. 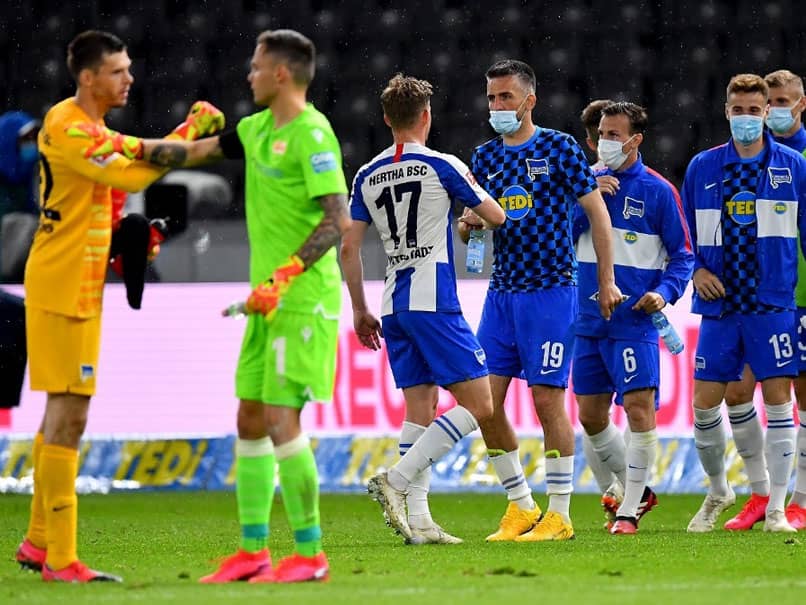 Hosts Hertha claimed the Berlin derby bragging rights over Union on Friday with a convincing 4-0 victory in their almost empty 74,000-capacity Olympic Stadium. Hertha moved up to 10th place after the opening match of the second round of games since the Bundesliga restarted last week under strict coronavirus measures thanks to second-half goals from Vedad Ibisevic, Dodi Lukebakio, Matheus Cunha and Dedryck Boyata. "It would have been fantastic if we could have played a game like that in front of 75,000 spectators. But I hope that the fans at least had fun in front of their TVs," said Hertha coach Bruno Labbadia.

"In the first half we played very well against well-organised opponents. I had to make that clear to my team at half-time because they were feeling a bit negative.

"By the end we were happy because these were important points in the relegation battle."

Labbadia started Czech Republic midfielder Vladimir Darida in the only change from last Saturday's win at Hoffenheim in his first home match in charge.

Union's Urs Fischer, who guided the east Berlin outfit to the top-flight for the first time this season, brought in four fresh faces to his starting lineup after Sunday's loss to champions Bayern Munich.

A minute silence was held before kick-off at the eerily quiet ground in the German capital in remembrance of all victims of COVID-19.

The best chance of the opening 20 minutes, which were dominated by Labbadia's men, fell to winger Lukebakio but the DR Congo international's effort was saved by Rafal Gikiewicz.

Labbadia's side continued their dominance into the second half.

Lukebakio was stopped two minutes into second half again by Gikiewicz before captain Ibisevic headed home a powerful opener.

Just 70 seconds later Hertha doubled their lead as Bosnia-Herzegovina forward Ibisevic fed Lukebakio who got the better of Gikiewicz with a side-footed effort.

Both goals were greeted by the Hertha club anthem echoing around the ground built for the 1936 Olympics as it was played on the public address system.

Labbadia celebrated by elbow bumping with his coaching staff as did his players on the field.

Hertha added a third on the hour mark as Brazilian playmaker Matheus Cunha scored his fourth goal of the season.

Lukebakio missed with an ambitious overhead kick inside the box and Cunha, who joined from RB Leipzig in January, side-footed home from outside the area after 62 minutes.

Centre-back Boyata, who apologised for breaching virus-related league protocol after grabbing the face of team-mate Marko Grujic during last weekend's win, claimed a fourth with 13 minutes to play.

The Belgium defender celebrated by kissing his elbows and chest-bumping team-mates including Jordan Torunarigha as they clinched revenge after November's derby defeat, the first time the sides had met in the German top-flight.

"We laid it on a plate for Hertha. But we've lost one game, nothing more, nothing less," said Union coach Fischer.

On Saturday, second-placed Borussia Dortmund can close the gap to a point on leaders Bayern Munich with a win over Wolfsburg.

Elsewhere, Borussia Moenchengladbach will place 13,000 cut-out images of fans in their stadium for the visit of Bayer Leverkusen.

Hertha BSC Berlin Football
Get the latest updates on IPL 2021, IPL Points Table , IPL Schedule 2021 , live score . Like us on Facebook or follow us on Twitter for more sports updates. You can also download the NDTV Cricket app for Android or iOS.