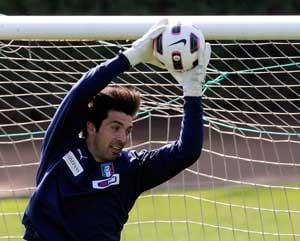 They also qualified for the World Cup last year and only a narrow 1-0 defeat to England in their final group game, coupled with a last gasp win for the USA against Algeria, prevented them going through to the knock-out stages.

"They're an emerging nation, it won't be easy," said Buffon from Italy's Coverciano base outside Florence.

"We want to secure qualification as soon as possible and it wouldn't be bad winning the Euro either."

Following the decisive performances by Italy veterans Francesco Totti and Alessandro Del Piero at the weekend - the former passed 200 league goals while the latter scored a brilliant individual winner against Brescia - Buffon claimed there are others who could potentially reach such heights.

"Reaching their level won't be easy but (Mario) Balotelli, (Antonio) Cassano and (Giuseppe) Rossi can do it, they just have to take that final step up in quality," he said.

Manchester City's Balotelli and Roma midfielder Daniele De Rossi were both left out of coach Cesare Prandelli's squad for the match and next week's friendly against Ukraine in Kiev due to disciplinary reasons having been sent off recently for their clubs for violent conduct.

"Prandelli was the best signing for the national team, he's been the rock around which the team has been built," he said.

Turning his attention to his club Juventus, and their current predicament, Buffon also offered words of support for beleaguered boss Luigi Delneri.

"Delneri works really hard and he's someone serious. He's done really well not to fall into negativity, you can see that he knows how to manage this type of situation."

"Having begun with other expectations, at a certain point we thought we were carving out a place amongst the big boys once again."

"But instead, thanks to a few poor performances and many injuries, we lost the second place we had earnt."

"We lost our self-confidence and we were in danger of falling into a vortex, as happened last year."

"But the reaction we saw against Brescia was that of a united team and gives us hope that we'll have a good end to the season."

As for the title race, with Juve not involved Buffon admitted he will be cheering for outsiders Udinese.

"They say Milan are the favourites and Inter the best. Napoli also aren't out of the running, like Udinese," said Buffon.

"Their style of play is so enjoyable that I really want to support them."

Comments
Topics mentioned in this article
Football Italy Slovenia Yoann Gourcuff Philippe Mexes Franck Ribery Gianluigi Buffon
Get the latest updates on ICC T20 Worldcup 2022 and CWG 2022 check out the Schedule, Live Score and Medals Tally. Like us on Facebook or follow us on Twitter for more sports updates. You can also download the NDTV Cricket app for Android or iOS.