Brazil's Ronaldo was a hero to young Lionel Messi

Barcelona striker Lionel Messi, widely considered the best player in the world, has revealed that Ronaldo was one of his heroes -- but not his Portuguese rival. 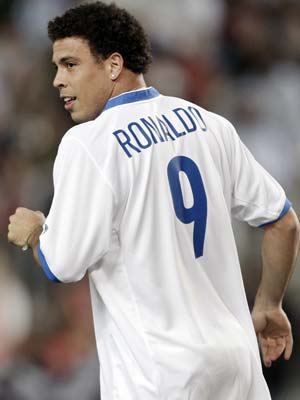 Barcelona striker Lionel Messi, widely considered the best player in the world, has revealed that Ronaldo was one of his heroes -- but not his Portuguese rival.

"Ronaldo was my hero," Messi was quoted as saying in the latest edition of British football magazine FourFourTwo, referring to the Brazilian Ronaldo Luis Nazario de Lima, not Real Madrid's Cristiano, with whom he is vying for the Ballon d'Or.

"I loved watching players like (Zinedine) Zidane, Ronaldinho and Rivaldo but Ronaldo was the best striker I've ever seen," he added.

"He was so fast he could score from nothing, and could shoot the ball better than anyone I've ever seen."

Messi, 25, is tipped to pick up the Ballon d'Or award for the world's best footballer. Like Ronaldo, who also played at Barcelona, and France legend Zidane he has won the prestigious accolade three times.

Comments
Topics mentioned in this article
Lionel Messi Football Barcelona France Brazil
Get the latest updates on IPL 2021, IPL Points Table , IPL Schedule 2021 , live score . Like us on Facebook or follow us on Twitter for more sports updates. You can also download the NDTV Cricket app for Android or iOS.