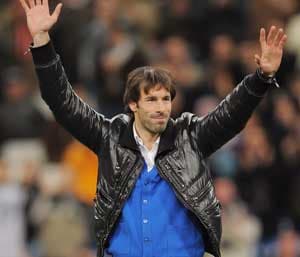 Rovers' Indian owners, Venky's, have been looking to make a marquee signing since purchasing the club last year but missed out on both Ronaldinho and David Beckham during the January transfer window.

Van Nistelrooy, 34, has said that he will not sign a new contract at German side Hamburg when his current deal expires in the summer and Kean told the ESPN Soccernet website that Blackburn were poised to pounce.

"Yes, I can confirm we are interested," said Kean, who replaced the sacked Sam Allardyce in January.

Van Nistelrooy scored 150 goals during a five-year stint at United and was refused permission to return to Real when the Spanish giants made a bid to bring the Dutchman back to the club in January.