Best is yet to come from Manchester United, warns David Moyes 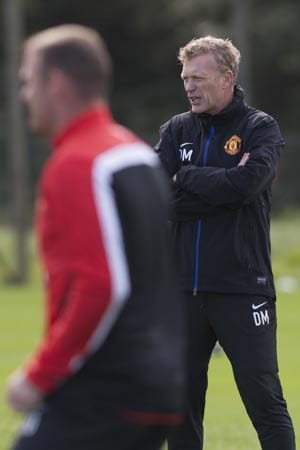 Manchester United manager David Moyes has said that the best is yet to come after they routed Bayer Leverkusen 5-0 in the Champions League -- their biggest European away win for 56 years.

United qualified for the knock-out stages and stayed top of Group A with their biggest away victory in Europe since beating Shamrock Rovers 6-0 in September 1957.

"The best days are still to come and there will be even better days," said United manager Moyes on Wednesday in Leverkusen.

"The main thing is that we have qualified and stayed top of the group, it's great to score five goals away from home, but I want it to be something we do regularly, not just every now and then.

"To come to Germany and win 5-0 is superb, Leverkusen have a good home record which puts it in perspective."

A volley from right-back Antonio Valencia and an own goal from Leverkusen centre-back Emir Spahic gave United a commanding early lead before defender Jonny Evans added a third with an hour gone.

England defender Chris Smalling added their fourth on 77 minutes after he met Wayne Rooney's chip at the back post.

Nani then latched on to Giggs's superb long ball for a fine solo goal for the fifth on 88 minutes with the Leverkusen defence in tatters.

Leverkusen deservedly suffered their first home defeat in 14 games since losing 2-1 to Bayern Munich in the Bundesliga back in March.

Bayer need to win at Real Sociedad in a fortnight and hope United beat Shakhtar Donestk at Old Trafford to reach the knock-out phase.

England striker Rooney, who played a hand in the first four goals, and ever-green Welshman Ryan Giggs, who turns 40 on Friday, were singled out for praise by Moyes after outstanding displays.

On the eve of Giggs' 40th birthday, Moyes said that the former shows no signs of slowing down.

"People have mentioned his age, but you can't question his footballing ability. He's an unbelievable player," said Moyes.

"He's getting better, just his vision alone for the final goal for Nani.

"You couldn't say he needed to come off and I am lucky to work with him. He just keeps getting better.

"You just keep playing him and Ryan will tell us when he's had enough.

"He works really hard in training and produces these great performances."

With Dutch striker Robin van Persie to return from a groin injury, Moyes said he is eager to keep Rooney fresh.

"Wayne doesn't need a rest, he's in form and fit, but I'll be watching for if he does. If the opportunity comes I will make sure I keep him as fresh as I can," said Moyes.

"He's one of those players better off playing regularly, but I don't want to find him having to sit out for five or six games in the middle of the season."

Having succeeded Sir Alex Ferguson as United manager at the start of the season, Moyes basked in the glory of his best night in office.

"The goals will take the headlines, but I thought we defended well tonight, it's not just about the goals for me, but the team performance," said the Scotsman, whose side host Shakhtar Donestk in a fortnight.

"The next part is to win the group in the next game, but we want to do well in all competitions.

"Sunday (the 2-2 Premier League draw at Cardiff City) was a slip up, but the biggest thing for me is that we are improving and progressing."

Bayer Leverkusen boss Sami Hyypia admitted his side had been out-classed and showed United too much respect.

"It's not very pleasant to sit here after a game like that. We lost belief after they went 2-0 up," he said.

"We tried to pull things back after the break, but their third goal was the end of the match.

"After they went 2-0 up, they didn't stand so deep and started to counter, we failed to make any openings.

"It sounds a bit strange, but I hope this result is good for us in the future and everyone thinks about where we went wrong."

But he said United can reach the Champions League final.

"They can go all the way, I think they played very well and after those early goals, they could sit back, wait for us to lose the ball and hit us on the counter.

"If they score first, it will be difficult for any opponent to play against them."

Comments
Topics mentioned in this article
Arsenal Manchester United Chelsea Liverpool Football Bayer Leverkusen Alex Ferguson Chris Smalling Wayne Rooney
Get the latest Cricket news, check out the India cricket schedule, Cricket live score . Like us on Facebook or follow us on Twitter for more sports updates. You can also download the NDTV Cricket app for Android or iOS.