Oscar Cardozo bagged a brace as Benfica beat Spartak Moscow 2-0 in the Champions League, but both teams' chances of qualifying for the knockouts remain remote. 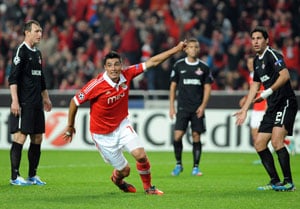 Oscar Cardozo bagged a brace as Benfica beat Spartak Moscow 2-0 in the Champions League, but both teams' chances of qualifying for the knockouts remain remote.

Cardozo transformed the match after coming off the bench at half-time and could have scored a hat-trick from the penalty spot but hit the bar.

With Celtic stunning group leaders Barcelona 2-1 in Wednesday's other game in Group G, both Spartak and Benfica are left with onerous paths to the knockout stages.

Benfica are third in the group with two games remaining, three points behind second-placed Spartak and must now beat Celtic and gain at least a point against Barcelona while fourth-placed Spartak must beat both of the top two teams and hope other results go their way.

Cardozo scored his first in the 55th minute with a bouncing header through goalkeeper Artyom Rebrov's legs off a Lorenzo Melgarejo cross.

Cardozo then made it two, 14 minutes later, when he stretched to volley in Ola John's cross.

The Paraguayan surged into the Spartak box soon afterwards but was cut down by Nicolas Pareja's sliding challenge from behind.

Pareja promptly became the second Spartak player to be sent off in three European games before Rebrov directed Cardozo's shot onto the bar with the slightest of touches.

Benfica enjoyed the lion's share of possession but Spartak created plenty of chances that only good goalkeeping from Artur and uninspired shooting, especially from Diniyar Bilyaletdinov, managed to thwart.

Comments
Topics mentioned in this article
Football Benfica Spartak Moscow
Get the latest updates on IPL 2021, IPL Points Table , IPL Schedule 2021 , live score . Like us on Facebook or follow us on Twitter for more sports updates. You can also download the NDTV Cricket app for Android or iOS.