Nicklas Bendtner scored a hat-trick as Arsenal bounced back from their League Cup final disappointment to thrash Leyton Orient 5-0 and earn a place in the FA Cup quarter-finals here on Wednesday. 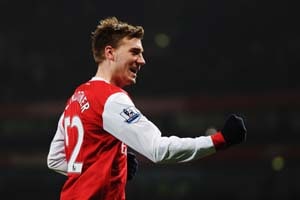 Nicklas Bendtner scored a hat-trick as Arsenal bounced back from their League Cup final disappointment to thrash Leyton Orient 5-0 and earn a place in the FA Cup quarter-finals here on Wednesday.

All eyes were on how Arsene Wenger's men would respond following defeat in the League Cup final to Birmingham, which denied them one chance of ending their six-year trophy drought.

The remain alive in England's premier knockout competition and goals from Marouane Chamakh and Gael Clichy either side of Bendtner's hat-trick set up a clash at Manchester United in the next round.

Their League One opponents still have a trip to Las Vegas to look forward to, reward from their chairman Barry Hearn for snatching a replay in the fifth-round tie, and they gave a decent account of themselves despite the one-sided scoreline.

More than 50 league places separated the two teams but he minnows created their own chances.

But it was Arsenal's evening. They were even given a lift before kick-off when Cesc Fabregas, who was sidelined for the tie, revealed he could return from a hamstring injury at the weekend.

Fabregas had been rated as a doubt for next week's Champions League clash against Barcelona, but wrote in his programme notes: "Perhaps I'll have a chance for Saturday (against Sunderland). I am running, getting better and don't sense any pain at the moment."

Fabregas was hoping his team-mates would keep the club in the FA Cup to give him a chance of lifting a trophy at the end of the season, having missed Sunday's final against Birmingham.

They needed an early goal to settle their nerves after the weekend and Chamakh provided it in the seventh minute.

Tomas Rosicky created the opener, speeding past Charlie Daniels on the right flank before cutting the ball back for Chamakh to side-foot home home.

It was the Morocco forward's first goal since November but Orient refused to give in, with Ben Chorley having a powerful volley on target before it hit his own team-mates.

Alex Revell also planted a finish wide from Daniels' cross, although any hopes of an upset were ended on the half-hour mark when Bendtner added a second.

Kieran Gibbs provided the cross, this time from the left, and Denmark striker Bendtner got above Daniels and looped his header into the far post. Bendtner added the third goal three minutes before the break, cutting in from the right wing and curling his effort in the far corner before cupping his ear to taunt the away fans.

Abou Diaby almost added another just after the break when he wriggled through three challenges and shot wide - but Arsenal fans were not made to wait long before another goal came.

Gibbs was brought down by Revell in the penalty area and Bendtner first his penalty past for his hat-trick, then was taken off by Wenger for a breather shortly after. Clichy smashed home a fifth when Emmanuel Eboue's cross found its way to the far post.

Comments
Topics mentioned in this article
Football Nicklas Bendtner Manchester City Bolton Wanderers Manchester United Arsenal
Get the latest updates on ICC T20 Worldcup 2022 and CWG 2022 check out the Schedule, Live Score and Medals Tally. Like us on Facebook or follow us on Twitter for more sports updates. You can also download the NDTV Cricket app for Android or iOS.