Beleaguered Marseille relaunched their title bid with a comprehensive 2-0 away win at Rennes which lifted the reigning champions up to third in the French top flight ahead of the weekend's remaining fixtures. 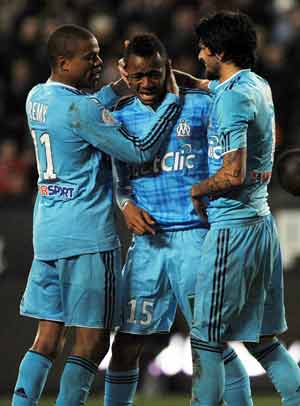 Beleaguered Marseille relaunched their title bid with a comprehensive 2-0 away win at Rennes which lifted the reigning champions up to third in the French top flight ahead of the weekend's remaining fixtures.

Marseille's battle for glory on three fronts this season -- in the league, league cup and the Champions League -- was overshadowed earlier this week with unwelcome off-field news.

Brazilian Brandao was taken off the team sheet after he was accused of rape. Coupled with reports that coach Didier Deschamps could quit Marseille and return to former club Juventus, their need for a win arguably went beyond a simple three points.

Despite missing Brandao, Marseille emerged from a lively first half 1-0 to the good after a well-taken goal by summer signing Loic Remy in the 24th minute.

Only two minutes earlier Ghanaian Andre Ayew had missed a great chance for the opener when he ran on to Argentine playmaker Lucho Gonzalez's pass and flashed an angled left-footed drive wide of Nicolas Douchez's upright.

After another defence-splitting move by Lucho, Ayew's weighted cross into the area was met by the diving Remy who gave Douchez no chance with a bullet header from the edge of the penalty area.

Rennes had enjoyed much of the possession in the opening period, but it was Marseille's turn to take a grip on the match -- under the watchful eye of Sir Alex Ferguson, whose Manchester United host Marseille in the second leg of their Champions League last 16 tie on Tuesday, with the score delicately poised at 0-0.

Rennes, however, came close to levelling moments after the restart when midfielder Jerome Leroy delivered a long free kick to the back post from where Yann M'Vila unleashed a shot which forced a smart diving save from Steve Mandanda.

Ten minutes later Ayew turned provider from Remy again, but the striker, with time and space on his hands, saw his close range drive well parried by Douchez.

Andre-Pierre Gignac was next to give Marseille sight of a second goal, but after turning defender Kader Mangane in the area a prone Douchez did well to parry the big France striker's shot with his foot.

Marseille's pressing was finally rewarded when Jordan Ayew, the brother of Andre who replaced Gignac in the 80th minute, pounced on a defensive error by Jean-Armel Kana-Biyik.

Ayew then held up the ball superbly on the left before offloading to Lucho who beat Douchez with a low drive.

Marseille moved up to third place on 48 points, one adrift of both Rennes and league leaders Lille.

Comments
Topics mentioned in this article
Football Paris SG Lyon Marseille
Get the latest updates on ICC T20 Worldcup 2022 and CWG 2022 check out the Schedule, Live Score and Medals Tally. Like us on Facebook or follow us on Twitter for more sports updates. You can also download the NDTV Cricket app for Android or iOS.