The game was played behind locked doors, but Holstein Kiel fans made their presence felt outside the stadium, blaring car horns and setting off fireworks. 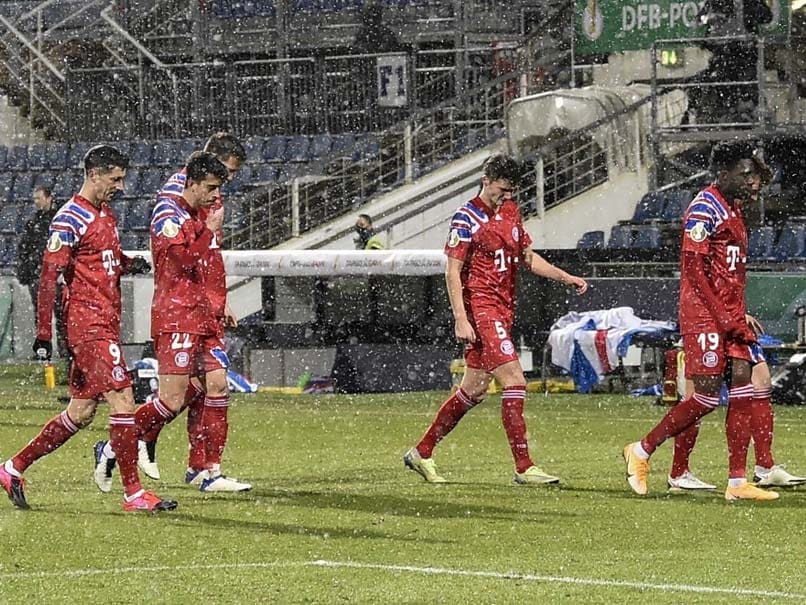 Bayern Munich were knocked out of a cup competition for the first time since Hansi Flick took charge.© AFP

Bayern Munich coach Hansi Flick insists the European champions learn from their earliest German Cup exit for 20 years, after second division side Holstein Kiel ended their dreams of repeating last season's treble. "We are extremely disappointed, we wanted to defend the treble," said Flick after Bayern were knocked out of a cup competition for the first time since he took charge in November 2019. "There are no excuses left - lots of games, too little rest," said Flick, pointing at Bayern's tightly-packed fixture list this season which often demands his team plays every few days.

"We have to tick it off and do things better. We have to be more compact in defence, protect the central midfield better and apply more pressure."

Bayern have five weeks to fix their porous defence before facing Lazio away in the last 16, first leg tie in their Champions League defence.

However, the Bundesliga leaders' hopes of repeating last season's triple-trophy haul is over following their German Cup exit.

Like the heavy snow which fell during the second-half, Kiel were ice cold in taking their chances.

Goals by Serge Gnabry and Leroy Sane gave Bayern a 2-1 lead with 90 minutes gone, but a lapse in concentration allowed Kiel captain Hauke Wahl to score a last-gasp equaliser.

Bayern then laid siege to the hosts' goal, but Kiel held the European champions to a 2-2 draw after extra time and their nerve for a 6-5 victory in the penalty shoot-out.

After both sides netted their opening five attempts, Bayern midfielder Marc Roca was the first to have his saved.

The game was played behind locked doors due to high numbers of the coronavirus in Germany, but Kiel fans made their presence felt outside the stadium, blaring car horns and setting off fireworks.

"You wanted to win the triple again?!" Kiel fans jeered at Bayern's team bus as it pulled out of the stadium car park after midnight.

Kiel are the first non-Bundesliga club to knock Bayern out in the cup's second round since Magdeburg, then in Germany's fourth-tier, in 2000/01.

"Something like this happens perhaps once in a lifetime," beamed Kiel's 32-year-old coach Ole Werner.

The last time Bayern exited the German Cup so early, Thomas Mueller had just joined their youth structure as an 11-year-old.

"The cup exit is brutal. This is certainly not the best phase for FC Bayern," Mueller said. The loss follows last Friday's 3-2 league defeat at Moenchengladbach.

Bayern have conceded 24 league goals this season - more than any of the other top six clubs in the Bundesliga.

Having lost his temper in a post-match interview, Mueller later apologised on Instagram to an ARD reporter he felt was amused by Bayern's defeat.

"Now you are laughing here," he fumed after being asked what the mood was like in the Bayern dressing room.

Bayern need to bounce back in Sunday's tricky home tie against Freiburg, who are on a club-record five-game winning streak in the league.

Bayern München Serge Gnabry Leroy Sané Football
Get the latest updates on IPL Auction 2023 and check out  IPL 2023 and Live Cricket Score. Like us on Facebook or follow us on Twitter for more sports updates. You can also download the NDTV Cricket app for Android or iOS.