Former Bayern Munich president Uli Hoeness finds it "a pity" that no fans will be present for the German Cup final, while Bayer Leverkusen sports director Rudi Voeller feels the same before his club's first cup final since 2009. 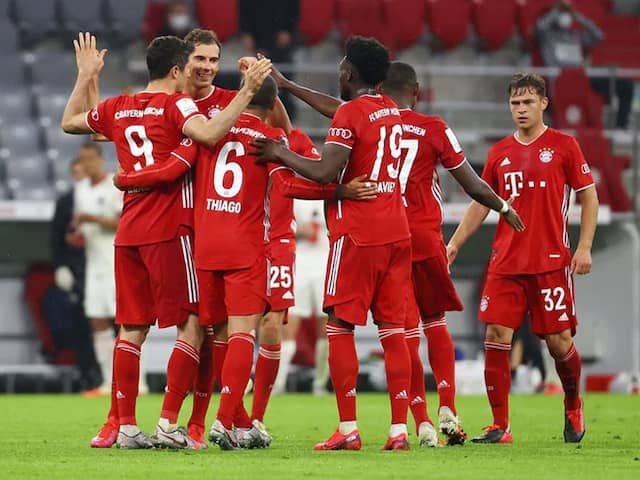 Bayern Munich and Bayer Leverkusen will face each other in the final of the German Cup.© AFP

Treble-chasing Bayern Munich are hunting their second title this season in Saturday's German Cup final, a behind-closed-doors showdown that should have been an "absolute highlight" for success-starved Bayer Leverkusen fans. Normally, the end-of-season showpiece final at Berlin's iconic Olympic Stadium would be a festive affair in front of a packed house of 75,000 supporters. However, due to the coronavirus pandemic, just 700 will be allowed into the enormous stadium for this year's final, including both teams, their backroom staff and officials.

Germany head coach Joachim Loew is one of the few invited guests.

After the final whistle, when German FA president Fritz Keller hands over the trophy, only the cheers of the winning team will echo around the cavernous stadium.

Former Bayern president Uli Hoeness finds it "a pity" that no fans will be present for the Berlin spectacle, while Leverkusen sports director Rudi Voeller feels the same before his club's first cup final since 2009.

"For our fans, this would have been an absolute highlight after many years," said former Germany midfielder Voeller.

"To play in this giant cauldron in front of just a few spectators is quite sad."

Nevertheless, holders Bayern are determined to defend the cup, even if head coach Hansi Flick admits that without travelling support, their fans will be "very, very absent".

Having lifted the Bundesliga trophy last Saturday for the eighth straight year, Bayern are targeting the next piece of silverware in their treble bid before tackling the Champions League in August.

"The boys are up for it and want to win the next title, we will do everything we can to achieve that," said Bayern sports director Hasan Salihamidzic.

"We are very optimistic that we will come out as winners."

While Bayern are looking to win the cup for the 20th time, Leverkusen are chasing only their second title since their lone triumph in 1993. They finished as runners-up in both 2002 and 2009.

Jamaica winger Leon Bailey scored twice when Leverkusen shocked Bayern with a 2-1 win at the Allianz Arena in November.

However, the Bavarian giants are now on a 16-match winning streak.

"We're playing against the best team in Europe at the moment," admitted Voeller, but "in a cup final, there's always something possible."

An ace up Leverkusen's sleeve is attacking midfielder Kai Havertz, who has been linked with a move to Bayern.

The 21-year-old Germany international was injured for both Leverkusen's shock win in Munich and last month's 4-2 home league defeat against Bayern.

Voeller believes Havertz, who has scored 16 goals this season, will play a major role because dealing with pressure is "one of his great qualities. He has a world-class career ahead of him."

Bayern striker Robert Lewandowski is seeking his 50th goal of the season. He is one shy of a half-century and last weekend was crowned the Bundesliga's top scorer for the fifth time in his career after netting 34 times.

Bayer Leverkusen Football
Get the latest Cricket news, check out the India cricket schedule, Cricket live score . Like us on Facebook or follow us on Twitter for more sports updates. You can also download the NDTV Cricket app for Android or iOS.