England play Moldova and Ukraine as part of the World Cup qualifiers next month. 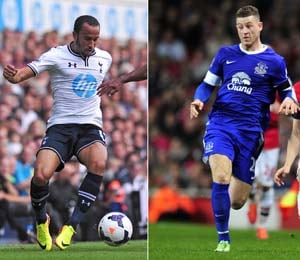 Barkley, 19, caught the eye with a fine goal at Norwich City on the opening day of the Premier League campaign, while 22-year-old Townsend impressed during a loan spell at Queens Park Rangers last season.

"We're giving ourselves a chance to look at players who've got a very bright future and who are capable of making a difference to a game, as we see them doing each week in Premier League football," Hodgson said.

"Players like Barkley, Townsend and (Liverpool's Raheem) Sterling can make a difference. They can be players who make a big impact and help you win. They're there on merit, really."

Southampton striker Rickie Lambert retains his place after scoring with his first touch on his debut in the 3-2 win over Scotland earlier this month, with Liverpool's Daniel Sturridge returning after missing that game through injury.

Hodgson said he was pleased to be able to call upon Sturridge again, after he injured his ankle in May's 1-1 friendly draw with the Republic of Ireland.

"It's great he's played for Liverpool and done so well," the England manager said.

"He started so brightly with England in the Ireland game and unfortunately got carried off and it kept him out for two months. But he's always one we've had in mind."

Celtic goalkeeper Fraser Forster replaces Ben Foster of West Bromwich Albion, who has been ruled out for around 12 weeks with a stress fracture of a bone in his right foot.

Hodgson defended first-choice goalkeeper Joe Hart, who was at fault for Scotland's opening goal in England's friendly win and was also criticised for his display in Manchester City's 3-2 loss at Cardiff City on Sunday.

"We know goalkeepers are always in the firing line -- they're the ones people turn to and look at," Hodgson said.

"I'm sure Joe is confident enough and big enough to understand these things.

"Goalkeepers like Joe in top teams like Manchester City, and again with England, don't get a lot to do, so every time you make a mistake, it's highlighted. As far as I'm concerned, I've every faith in Joe."

Hodgson's side currently trail Montenegro by two points in European qualifying Group H, but have a game in hand.

England squad for World Cup qualifiers against Moldova and Ukraine next month:

Comments
Topics mentioned in this article
Football Dinamo Tbilisi Tottenham Hotspur Leighton Baines Ross Barkley
Get the latest Cricket news, check out the India cricket schedule, Cricket live score . Like us on Facebook or follow us on Twitter for more sports updates. You can also download the NDTV Cricket app for Android or iOS.