Barcelona's Pedro out for 10 days with leg injury

Pedro scored for Spain in their 1-0 win over France in a World Cup qualifier on Tuesday, but suffered a leg injury in the same game. 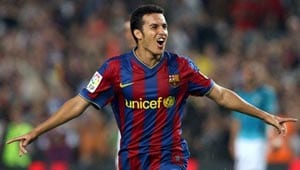 Barcelona forward Pedro Rodriguez will be sidelined for 10 days and miss the first leg of the Champions League quarterfinals against Paris Saint-Germain after injuring his leg while playing for Spain in a World Cup qualifier.

The Catalan club said on Wednesday that "tests have confirmed that the player has small muscle fiber tears" in his left leg.

Pedro scored in the 58th minute of the 1-0 win at France on Tuesday, giving Spain first place of Group I in European qualifying for the 2014 World Cup in Brazil.

Apart from the Champions League match at Paris Saint-Germain next Tuesday, Pedro will miss Barcelona's Spanish league match at Celta Vigo on Saturday.

Comments
Topics mentioned in this article
Football Barcelona Bayern Munchen Real Madrid Pedro Lionel Messi David Villa
Get the latest updates on India vs Australia Series, check out the India vs Australia Schedule for 2020-21 and Ind vs Aus live score . Like us on Facebook or follow us on Twitter for more sports updates. You can also download the NDTV Cricket app for Android or iOS.