Arsenal lost ground in the Premier League title race despite battling back to earn a 2-2 draw against West Bromwich Albion at the Hawthorns on Saturday. 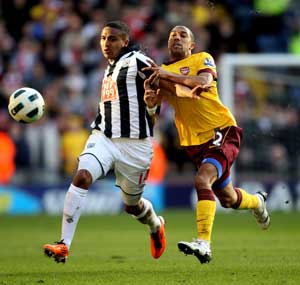 Arsenal lost ground in the Premier League title race despite battling back to earn a 2-2 draw against West Bromwich Albion at the Hawthorns on Saturday.

Arsene Wenger's side looked dead and buried with 20 minutes to play after Steven Reid and Peter Odemwingie, who punished a howler from goalkeeper Manuel Almunia, put Albion firmly in control.

Even that comeback was little consolation to Arsenal as Manchester United moved five points clear at the top with a 1-0 win over Bolton.

The Gunners have a game in hand but they still look too fragile at the back to end their six-year trophy drought.

The inevitable question marks over the mental toughness of Wenger's side have surfaced during a miserable two weeks in which they have lost the League Cup final and crashed out of the Champions League and FA Cup.

Roy Hodgson's side must have thought they had recorded their first double over the North London side for 50 years when they established a 2-0 lead before the hour - thanks to a dreadful defensive performance from Wenger's side, but Arshavin sprang to life to inspire two goals in an eight-minute spell that prevented Albion causing greater damage to their title challenge.

Arshavin emerged from his shell and rifled home a wonderful diagonal shot from just inside the area to give his side hope.

Soon after the diminutive Russian stood up a cross to the far post for substitute Nicklas Bendtner to head back across the six-yard box and Abdoulaye Meite got himself into a dreadful tangle under his own crossbar, allowing Robin van Persie to force the ball over the goal line to snatch a point.

It was a cruel ending for Albion who had been inspired from the moment Reid exposed the frailties of Arsenal's defending with a powerful header from Chris Brunt's corner as Aaron Ramsey lost his man in the penalty area.

Worse was to follow when Almunia, who will be haunted by the spectre of Jens Lehmann on the substitutes' bench, went into his own personal mental meltdown just before the hour mark.

He made the suicidal decision to go racing out of his penalty area to intercept a long ball, when Sebastien Squillaci could easily have dealt with the danger and the pair succeeded in presenting Odemwingie with a simple tap-in from the edge of the area.

On the evidence of this 41-year-old German Lehmann, signed as a free agent this week after retiring last season, must be a better bet for the remainder of the season as Arsenal look to overturn the gap between themselves and United.

At that point Arsenal's title challenge looked over and Wenger a broken man.

As it is, a point just about keeps them in the hunt, but there will be no more room for error if they want to win their first title since 2004.

Comments
Topics mentioned in this article
Football West Bromwich Albion Birmingham City Everton Liverpool Steven Gerrard Chelsea Arsenal
Get the latest updates on ICC T20 Worldcup 2022 and CWG 2022 check out the Schedule, Live Score and Medals Tally. Like us on Facebook or follow us on Twitter for more sports updates. You can also download the NDTV Cricket app for Android or iOS.