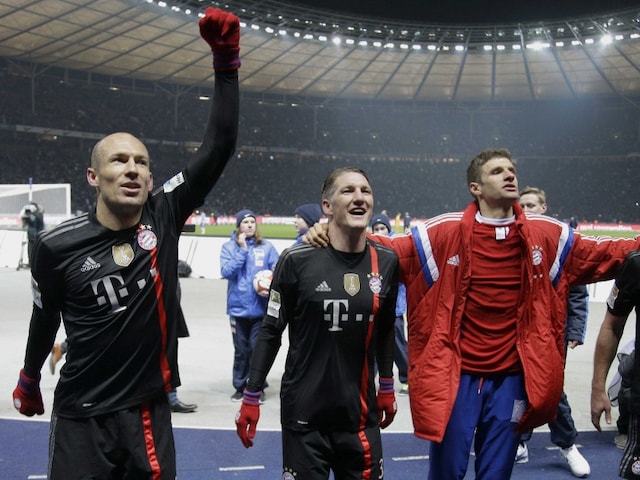 Bayern Munich opened a 10-point lead in the Bundesliga on Saturday with a 1-0 win at Hertha Berlin to recover from their midweek defeat at Manchester City.

With their nearest rivals Wolfsburg facing Borussia Moenchengladbach on Sunday, Arjen Robben's first-half goal in Germany's capital was enough to give Bayern their 10th league win of the season in 13 games.

After suffering their first defeat of the season at Manchester in the Champions League on Tuesday, their first loss in 23 games, this was a no-frills performance from the defending champions to preserve their unbeaten Bundesliga record.

"I was happy with the first half performance, but we can improve on the second."

Bayern went ahead at Berlin's chilly Olympic Stadium when Mario Goetze played Thomas Mueller into the area before Robben hit the top left-hand corner from 17 metres out with 27 minutes gone.

"The second-half wasn't good, but at least we took three points."

With six months left of the season, Bayern's march to their third straight Bundesliga title looks virtually unstoppable once again.

At the other end, Borussia Dortmund, who are at Eintracht Frankfurt on Sunday, dropped back to the bottom of the table after both Werder Bremen and Stuttgart picked up wins.

Werder Bremen's 4-0 hammering of Paderborn and VfB Stuttgart's 4-1 win at Freiburg on Friday saw them both leap-frog Dortmund.

Bremen moved up to 14th as caretaker coach Viktor Skripnik picked up his fourth win in five games since taking over from the fired Robin Dutt as Zlatko Junuzovic, Davie Selke, Fin Bartels and Levent Aycicek scored.

Both Schalke and Bayer Leverkusen roared back from midweek Champions League defeats by claiming heavy wins to go sixth and third respectively.

Schalke responded to their 5-0 Champions League thrashing by Chelsea with a 4-1 hammering of Mainz at home with Dutch striker Klaas-Jan Huntelaar claiming a hat-trick.

Netherlands international Huntelaar fired Schalke into a 2-0 lead after just 25 minutes with two superb goals before Japan striker Shinji Okazaki pulled one back for the visitors.

But the Royal Blues made sure of the three points when Huntelaar's final pass was curled home by Swiss midfielder Tranquillo Barnetta on 54 minutes.

The Dutchman completed his hat-trick when he slammed home Eric-Choupo Moting's final pass on 61 minutes.

Bayer Leverkusen put their Champions League defeat at home to Monaco behind them with a 5-1 comeback win at the BayArena against Cologne in the Rhine derby as both Josip Drmic and Karim Bellarabi scored twice.

Bellarabi, Huntelaar and Okazaki, along with Eintracht Frankfurt's Alexander Meier and Bayern Munich's Mario Goetze, have all claimed seven goals this season with all five as the league's joint top-scorers.

Following a seven-goal thriller, Hoffenheim went seventh in the table after their 4-3 win over Hanover 96, who drop to eighth in the table, as Niklas Suele headed what proved to be the winner for the home side.

Comments
Topics mentioned in this article
Arjen Robben Bayern Munchen Hertha BSC Berlin Football
Get the latest Cricket news, check out the India cricket schedule, Cricket live score . Like us on Facebook or follow us on Twitter for more sports updates. You can also download the NDTV Cricket app for Android or iOS.