Arjen Robben had missed his side's three previous games with a groin injury, but he struck twice in the second half at a squally Cardiff City Stadium to give the Netherlands' victory in their first game since they missed out on a place at next year's tournament in France. 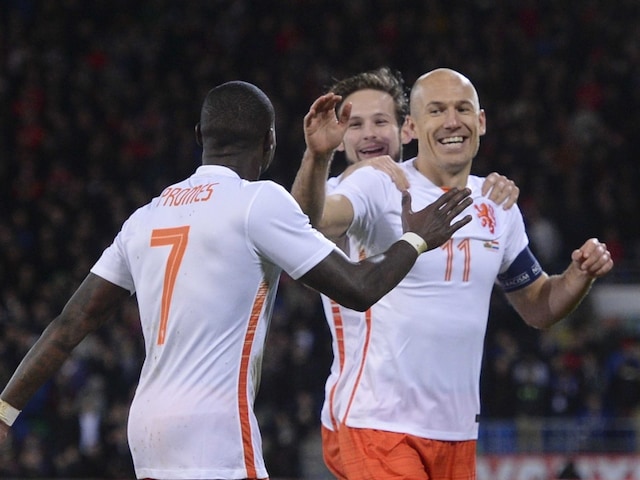 Arjen Robben scored his first international goals in a year as Wales' Euro 2016 preparations began with an entertaining 3-2 friendly defeat by the Netherlands in Cardiff on Friday. (Read More in Football)

Robben, Holland's captain, had missed his side's three previous games with a groin injury, but he struck twice in the second half at a squally Cardiff City Stadium to give the Netherlands' victory in their first game since they missed out on a place at next year's tournament in France.

The teams had last met in June 2014, when Holland had used an Amsterdam friendly to gear up for the World Cup, but this time the boot was on the other foot with Wales having qualified for a first major tournament since the 1958 World Cup.

Holland had lost eight of their 14 matches since finishing third at the World Cup and in a bid to revive their fortunes, coach Danny Blind reverted to the 3-5-2 system that Louis van Gaal had employed in Brazil, with fit-again captain Robben partnering Dost up front.

In Bale's absence, Blackburn Rovers loanee Tom Lawrence was handed the heavy Wales number 11 shirt and he twice threatened to mark his full debut with a goal, first cutting inside Virgil van Dijk and shooting tamely at Jasper Cillessen from Joe Allen's pass before then dragging a shot wide.

Even without Bale and Ramsey, Wales displayed the same composure in possession that had been a feature of their play in qualifying, but after Robben had curled a warning shot over the bar, the Dutch took the lead.

A slick move saw the visitors work the ball to the right, where Daryl Janmaat crossed, and Dost met the ball with a downward header at the back post that Wayne Hennessey could only push into the net.

Hennessey partially redeemed himself by parrying from Quincy Prowess and in first-half stoppage time Wales levelled, Ledley following up to score after Allen's penalty -- awarded for a handball by Terence Kongolo -- was parried by Cillessen.

Robben was thwarted by Hennessey early in the second period, but shortly after he put Holland ahead with a classic Robben goal, cutting across the box from the right and curling home with his trusty left foot.

After substitute George Williams had slid an effort wide, another entrant scored the equaliser, Huws ghosting in to head home Allen's in-swinging cross from the right for his first Wales goal.

But Robben had the last word, running through and coolly beating Welsh substitute goalkeeper Owain Fon Williams to preserve Holland's perfect record in eight matches against Wales and ensure his side will go into Tuesday's friendly with world champions Germany on a winning note.

Comments
Topics mentioned in this article
Arjen Robben Gareth Bale Netherlands Wales Football
Get the latest Cricket news, check out the India cricket schedule, Cricket live score . Like us on Facebook or follow us on Twitter for more sports updates. You can also download the NDTV Cricket app for Android or iOS.